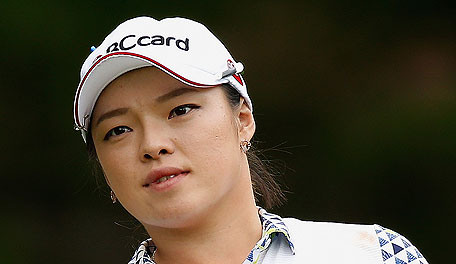 SYLVANIA, Ohio - South Korea's Ha Na Jang birdied the par-5 18th for a 5-under 66 and a one-stroke lead Thursday after the first round of the LPGA's Marathon Classic.

She chipped to 6 feet to set up the final birdie after hitting a 3-wood approach to the front edge.

"Just really good shot," Jang said about the chip with a 52-degree wedge.

"I feel happy today because in the morning ... I was very tired in my bed, so no practice today. I don't think about the score, so really good play today."

Winless in 23 career tour events, Jang birdied four of the first five holes on the back nine at Highland Meadows, dropped a stroke on the par-4 15th and rallied with the closing birdie.

"I like the course," Jang said. "Very narrow fairways and small greens. Very close to Korean golf course, so I think it's very easy for my feel. ... Really good golf course."

She took a simple approach on the course softened by a rainy month.

Kemp bogeyed her final hole, the par-4 ninth. The Australian has missed the cut in seven of 12 tournaments this season.

"My caddie and I were actually talking before I teed off that I had not had a 4 or 5 under in a while," Kemp said. "That was the plan today, so it was nice to pull it off. It's confidence. I've had an inconsistent year, some good and some bad. Hopefully, for the rest of the three days I can keep it up."

Kemp's approach on No. 9 landed in the rough to the left of the green. She hit to the fringe, but came back with a chip that hit the flagstick and she was able to make her putt for bogey.

"It was a funny lie," Kemp said. "I had a bad lie for the first chip, where I shouldn't have been in the first place."

Hill had three straight birdies on Nos. 6-8 to reach 4 under and parred the final 10 holes.

"I feel really good," Hill said. "All season I feel like I've been very consistent and building off good stuff. So, came to this course on Sunday and felt like it fit my eye really well."

Top-ranked Inbee Park, a three-time winner this season, birdied her final hole for a 70.

"I hit a lot of greens, but not really close," Park said. "Irons just weren't as pure as I thought it would be. Missed couple putts here and there. Only two birdies and one bogey. Not a bad start."

Defending champion Lydia Ko, ranked No. 2 in the world, opened with a 71.

Third-ranked Stacy Lewis also had a 71.