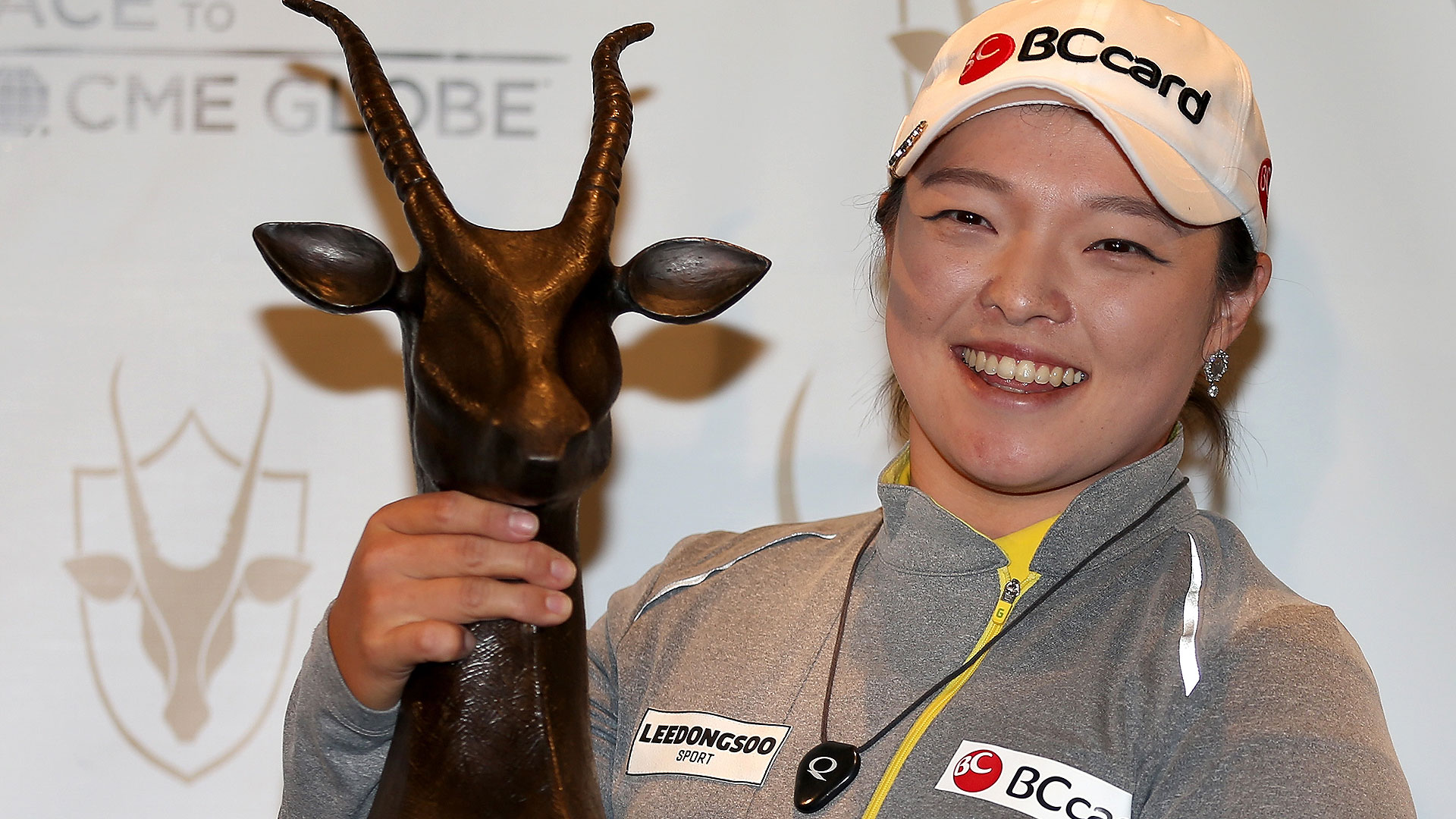 OCALA, Fla. - Ha Na Jang had to go the final 36 holes with the best player in women's golf to capture her first LPGA title Saturday.

Lydia Ko turned out to be more of a cheerleader than a challenge.

Ko fell back in surprising fashion with three bogeys and a double bogey in a five-hole stretch. Jang suddenly had to worry more about Canadian teen Brooke Henderson, and Ko was at Jang's side to push her along in the cold and increasing rain over the final hour at the Coates Golf Championship.

''Lydia, she say, 'Ha Na, you can do it. You're more confident and comfortable in your mind, no problem. Keep going, keep going,''' Jang said after closing with an even-par 72 for a two-shot victory over Henderson.

Jang reclaimed the lead with a 5-foot birdie putt on the 16th hole and then added a birdie on the 18th that only affected the margin. The 23-year-old Korean was in tears when the final putt dropped on a long week brought on my heavy rain on Thursday. Jang played 54 holes over the last two days.

''It's been a long day, especially with the weather the last few holes, but Ha Na finished so close in so many events,'' Ko said. ''It was great to see her play well and finish classy with a nice birdie.''

Ko, the LPGA Player of the Year making her 2016 debut, was tied with Jang after they completed the third round Saturday morning at Golden Ocala.

Ko, however, fell apart in the middle of the final round. She made three straight bogeys to finish the back nine, then hit her tee shot into the water and made double bogey on the par-3 11th to fall five shots behind. She ran off three straight birdies late in her round to try to stay in it.

She closed with a 75 and tied for third, three shots behind.

''I just couldn't get anything going today,'' Ko said. ''I wasn't hitting the ball great, and the putts weren't dropping, either. When those two combinations go, you know you're not going to make a lot of great birdies. But I finished strong, so I'll take that.''

Henderson had the lead until a pair of three-putt bogeys over the final five holes as the rain worsened, forming puddles on the edges of the green. The greens crew used leaf blowers on some of the puddles to help the water evaporate.

Henderson, who closed with a 72, tried to lay up on the par-5 18th with a hybrid and came within an inch of the hazard. With an awkward stance and a tough lie, she chunked a wedge to the front of the green, some 75 feet away, and did well to two-putt for par.

She posted at 9-under 279, and then waited to see if it would be enough for a playoff.

Sei Young Kim was at 9 under and had a 10-foot birdie putt on the final hole that missed on the right edge. Kim then missed the 3-foot par putt and finished at 8-under 280. Suzann Pettersen was in range until she fell back with consecutive bogey.

Lexi Thompson also had a chance until a peculiar decision on the par-3 15th. Thompson was two shots out of the lead when she chose to putt through about 6 feet of wet, Bermuda rough because the green sloped away from her. The ball moved only about 4 feet, and then she used putter again and barely got it out of the thick grass and onto the green. Thompson made double bogey.

Jang was 2 over for the final round after a three-putt bogey on the 14th and one shot behind. Henderson was on the 17th and three-putted to slip into a tie, and Jang pumped her fist when she made a 5-foot birdie on the 16th to take the lead.

Jang was 15th on the LPGA money list last year as a rookie, when she was runner-up four times. The player of the year on the Korean LPGA in 2013, Jang is projected to move into the top 10 in the Rolex Women's World Ranking. She was a runner-up at the Coates Golf Championship last year.

''I'm really comfortable at this golf course, and then very confident because of really good last year,'' she said.