Jin Jeong defeats Fisher in playoff to win in Perth 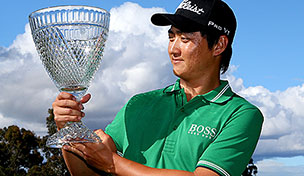 PERTH, Australia – Former top-ranked amateur Jin Jeong won the Perth International on Sunday for his first professional victory, beating England's Ross Fisher with a par on the first hole of a playoff.

Jeong, the South Korean player based in Melbourne, closed with a 3-under 69 to match Fisher at 10-under 278 at Lake Karrinyup. Fisher finished with a 68.

Australians Brody Ninyette and Dimitrios Papadatos were two strokes back along with England's Danny Willett. Papadatos shot 68, Willett 69, and Ninyette 72.

American Dustin Johnson tied for 12th at 4 under after a 66. Countryman Bo Van Pelt, the winner last year, was another stroke back after a 73.

The event was sanctioned by the European and Australasian tours.