HILVERSUM, Netherlands – Shiv Kapur of India shot a 2-under 68 to reach 8 under and join Belgium’s Nicolas Colsaerts in the halfway lead at the Dutch Open.

Colsaerts led by two shots after his first-round 62 but managed only a level par 70 in the rain-affected second.

“It is never easy to go and play again on a course you felt you owned the previous day, It was playing more difficult,” said the 27-year-old Colsaerts. “We had a couple of rain showers and there was a breeze. On the first day it was a lot easier. Today it was like playing a different golf course.”

Colsaerts began his round with a bogey at the 9th hole and finished it with another dropped shot at the 8th.

Three birdies in five holes had taken him to 10 under and into a two-shot lead. But with three holes to play he surrendered the lead by running up a double bogey at the 6th where he drove his ball into heather and lost it.

He regained a one-shot lead with 20-foot birdie putt at the next but on his last green he missed a ten-foot effort to save par and retain his advantage.

After his first-round 64, Kapur also found the rain problematic but after his 68 he feared more for the tournament than his score.

“The course has held up well so far, but it doesn’t need much more at the weekend to make it unplayable.”

Three players shared third place at seven under including Todd Hamilton of the United States who, having lost his US Tour card, is making a late attempt to gain one in Europe.

But such has been his poor form in recent years that the 44-year-old, who won the 2004 British Open at Royal Troon, was surprised to find himself on the leaderboard after a second-round 67.

“There have not been too many back-to-back good rounds for me in the last two or three years,” said Hamilton who had shot an opening 66 at Hilversumche Golf Club on Thursday.

Alongside Hamilton at 7 under were Christian Nilsson of Sweden after a second-round 65 and Jean Francois Lucquin of France who shot a 67.

Of the three European Ryder Cup players in the field only Germany’s Martin Kaymer threatened the halfway leaders. He shot a second straight 67 to lie two shots off the pace at 6 under. Kristoffer Broberg hasn't won since beating Patrick Reed in a playoff to clinch the 2015 BMW Masters. 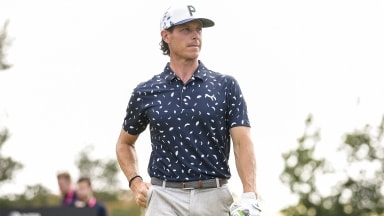 Kristoffer Broberg smashed the course record he set a day earlier with an 11-under 61 on Saturday to open an eight-shot lead after three rounds of the Dutch Open.

PGA champion Martin Kaymer has a chance to move further ahead in the European money list when the Dutch Open starts on Thursday.