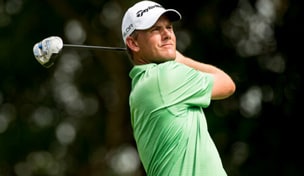 Getty Images
"That Tiger drop was really, really borderline. I can't live with myself without saying that." – Miller, on Tiger Woods’ drop on 14 during the final round of The Players. Woods went on to win the tournament. After consulting with playing partner Casey Wittenberg, Woods determined the point at which the ball last crossed the hazard – a point that some felt may have been closer to the hole than the true trajectory of the ball would have allowed. (Getty Images)  -

PLAYA DEL CARMEN, Mexico – Robert Karlsson and Kevin Stadler topped the OHL Classic leaderboard at 12 under Friday when second-round play was suspended because of darkness.

Karlsson played 36 holes Friday, shooting an 8-under 63 in the rain-delayed first round and adding a 67 in the afternoon on Mayakoba Resort's El Camaleon course.

''I hit some good iron shots and knocked in some putts,'' Karlsson said. ''I mean, I gave myself a whole bunch of chances and I took them, so it was great.''

Stadler had rounds of 67 and 63 in a 34-hole day. He birdied five of the last seven holes in the second round, finishing about 25 minutes before play was called for the day.

''I didn't really feel like waking up at 4 again tomorrow morning,'' Stadler said. ''Nice to be completely done with both rounds today and just kind of get a little bit of rest tonight.''

Karlsson finished with a birdie on the par-4 18th after making bogeys on 16 and 17. The Swede tied for 10th on Sunday in the McGladrey Classic, playing on a sponsor exemption, to earn a spot in the field this week.

Only 29 of the 127 players were able to complete the second round. After lengthy delays Thursday, there was a 26-minute delay Friday afternoon.

More than 4 1/2 inches of rain has hit the course since Wednesday afternoon.

''Obviously, it's very wet,'' Karlsson said. ''It's unbelievable that we're playing at all. The amount of rain that's been here the last few days, the course is in really great condition.''

Because of the wet conditions, players were allowed to use preferred lies in the first two rounds.

''It played about as easy as it can play for us today,'' Stadler said. ''With it being as soft as it is, the fairways played much wider than they typically play. No breeze today, so we kind of got let off the hook.''

Rory Sabbatini and Chris Stroud were tied for second at 9 under. Sabbatini had one hole left when play was suspended, and Stroud had three to go.

Ryan Moore, Jhonattan Vegas, Pat Perez and Jay McLuen were 8 under. Moore (67) and Vegas (68) finished the round, and Perez and McLuen each had four holes to play.