CARNOUSTIE, Scotland – Two-time major winner Cristie Kerr is hoping her love of links golf will help her secure a first victory of the season at the Women’s British Open.

The American, whose best finish at the British Open was a share of second place at Royal Lytham in 2006, is second in the LPGA money list behind defending champion Yani Tseng of Taiwan – despite failing to win a tournament this year.

“It’s a bit frustrating but you’ve just got to keep plugging away,” Kerr said Tuesday. “Hopefully this will be my week.”

The British Open, which begins on Thursday, is being played at Carnoustie for the first time in its 35-year history.

“I always enjoy playing links golf,” said Kerr, winner of the LPGA Championship last year and the 2007 U.S. Open. “People think it’s kind of shocking that this is my favorite kind of golf, but I love it.

“I like golf where you don’t have to be perfect, where the bounces are going to be different and it’s interesting every day.”

Despite only having a chance to look at eight holes since arriving in Carnoustie, Kerr was looking forward to the challenge of playing the historic course – even if the weather turns bad.

“It’s just perfect weather right now but as we know it never plays the same in a tournament as it does in practice,” she said. “We’re supposed to get some rain or something by Thursday so it could be very different.”

The last American to win the British Open was three-time champion Sherri Steinhauer in 2006. Steinhauer is one of nine former champions in the field that includes Laura Davies, the Englishwoman who won at Royal Birkdale in 1986, and Karrie Webb of Australia, also a victor on three previous occasions.

Another member of that contingent is the 22-year-old Tseng, who took the title at Royal Birkdale last year. She became the youngest woman to win four majors when she claimed her second LPGA Championship title last month, having also won the Kraft Nabisco Championship in 2010.

One American on top form coming into Carnoustie is Stacy Lewis, winner of this year’s Kraft Nabisco and runner-up to Ai Miyazato of Japan at the Evian Masters in Paris last weekend.

Lewis has five top-10 career finishes in majors and will be hoping to add to that total this week.

“I was really happy with the way I handled things at the Evian,” she said. “Just the pressure of being in the last couple of groups the last two days. It’s just getting more comfortable out there, and it’s a good time for me.”

Lewis, like most if the field, was also having her first look at the course.

“I really enjoy links-style golf. You have to be creative and hit different types of shots,” she said. “I think the weather actually looks pretty good, so hopefully we won’t get too much rain. But it will be windy and you have to play some low shots.

“You’ve got to putt well at any major championship, so I’m looking forward to it.”

Coming into the British Open after her victory in Paris, sixth-ranked Miyazato was delighted with her form as she bids for her first major.

“I’m really so happy to be here. It’s an amazing golf course,” Miyazato said. “The greens are really slopey which will make it very interesting to play.

“You need to really commit with the tee shots, in fact with every single shot on every single hole and it will be different every day.” 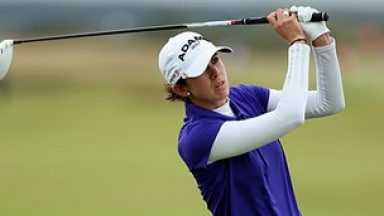 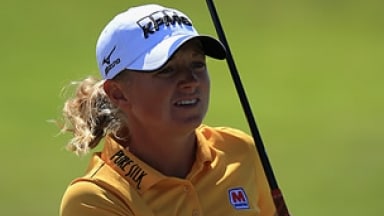 Stacy Lewis looked at the leaderboard near the second rounds end Friday at the Ricoh Womens British Open impressed with the challengers in the mix. 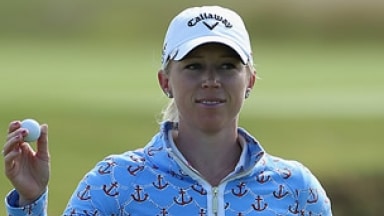 Morgan Pressel positioned herself well for a weekend run at winning her second major championship.