MADISON, Miss. – As the birdies mounted during Saturday’s third round of the Viking Classic, it looked as if Chris Kirk could do just about anything he wanted at Annandale Golf Club.

Golf isn’t supposed to be this easy. But the 26-year-old PGA Tour rookie sure made it look that way.

“I would never call it easy,” Kirk said. “But the conditions – there hasn’t been a whole lot of wind and the greens are just absolutely perfect. If you hit your putt on line, it’s going to go in and that makes things a lot easier.”

Kirk fired an 8-under 64 to take a one stroke lead going into the final round of the Viking Classic, just ahead of Sunghoon Kang, D.J. Trahan, George McNeill and Peter Lonard.

Kirk made four birdies in a row on the back nine in an impressive showing for one of the tour’s most successful rookies this season. He finished second behind Phil Mickelson at the Shell Houston Open and ranks 51st on the money list. He won two Nationwide Tour events in 2010, finishing second on the tour’s money list to earn his PGA Tour card.

With the world’s best golfers fighting brutal conditions at the British Open, the Viking Classic leaderboard is dotted with younger players taking advantage of their absence.

Annandale’s soft fairways and greens have certainly been more inviting.

Kang, a 24-year-old South Korean, is also in his rookie year on the PGA Tour. He’s played some of his best golf over the past couple weeks, making the cut at the U.S. Open and finishing a season-best 12th at the John Deere Classic last week.

After a decent start to the season, Kang suffered through a brutal stretch during the spring during which he missed five straight cuts.

He had a good excuse. He spent most of March serving in South Korea’s military, which was mandatory. In the process, he lost 15 pounds and obviously had little time to work on his golf stroke.

Kang took advantage of eagles on No. 5 and No. 11 – both par 5s – to shoot up the leaderboard after starting five strokes behind Hunter Haas and Lonard.

It was a long day for much of the field, with several players having to complete the second round before starting the third because of rain delays Friday. Kang was one of many golfers who had to play 36 holes in the Mississippi heat, though some cloud cover made the weather more bearable.

More than 4.5 inches of rain has fallen at Annandale this week, making the course susceptible to low scores for a third straight day. The 4-under cut line was tied for the lowest mark in tournament history, and the 22-under tournament record is well within reach Sunday.

Another PGA Tour rookie, Jim Renner, shot a 10-under 62 for the best round of the day. He started the third round eight strokes back, but now is in contention as one of three golfers two shots back.

“I played a little more aggressive and I got rewarded,” Renner said.

Trahan won the Viking Classic in 2006 and shot a 66 on Saturday.

Now the leaders prepare for what figures to be a final-round shootout on a course that’s giving up birdies by the fistful. Kirk said that makes strategy quite simple.

“If I don’t go out and make a bunch more birdies tomorrow I’m not going to be in the lead for long,” Kirk said. “You know you have to stay aggressive. You can’t just play for par. That’s not going to work.” 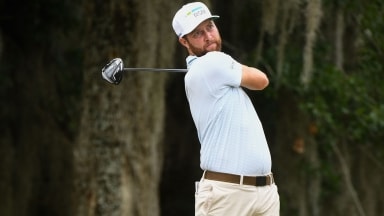