Ko (not that one) ousts Girls' Junior medalist

The 17-year-old Ko, from Victoria, British Columbia, beat stroke-play medalist Megan Khang of Rockland, Massachusetts, 1 up, in the round of 32, and topped Alyaa Abdulghany of Newport Beach, California, 2 and 1, in the afternoon round of 16.

Ko will face South Korea's Eun Jeong Seong on Friday morning. Seong routed Thailand's Chakansim Khamborn, 6 and 5, in the round of 16.

In the other upper-bracket quarterfinal, Jayna Choi of Collierville, Tennessee, will play Annika Cedo of the Philippines. Choi advanced with a 2-up victory over Karah Sanford of Escondido, California, and Cedo beat Gina Kim of Chapel Hill, North Carolina, 4 and 3.

Long-hitting Angel Yin of Arcadia, California, powered into the quarterfinals. She beat Mexico's Maria Balcazar, 4 and 3, in the morning, and eliminated South Korea's Yujeong Son, 5 and 3, in the afternoon.

In the other quarterfinal, Mexico's Evelyn Arguelles will face Mika Liu of Los Angeles. Arguelles beat Kathleen Scavo of Benicia, California, 1 up, and Liu topped Aneka Seumanutafa of Frederick, Maryland, 2 and 1. 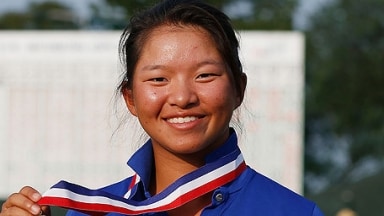 Medalist Khang advances in Round 1 of U.S. Girls' Junior.

Stroke-play medalist Megan Khang beat Shannon Brooks, 1 up, on Wednesday in the first round of match play in the U.S. Girls' Junior.