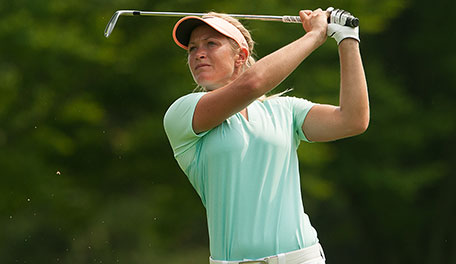 TROON, Scotland - Lydia Ko and Suzann Pettersen shared the first-round lead at 4-under 68 on Friday in the Ladies Scottish Open.

The second-ranked Ko had a bogey-free round at Dundonald Links in the final Ladies European Tour before the Women's British Open next week at Turnberry.

''I kind of didn't know what score to expect because the course is pretty tough, even without the wind,'' the 18-year-old New Zealander said. ''You can see by the scores it's not crazy low, but I think we were lucky with the wind not being as strong as it was the last couple of days.

''Playing over here in the Scottish Open, you can't use the same game as you can in the States. You're hitting different shots and I think the key to playing well here is being really creative, because you need to find the shot that will give you a high percentage.''

''It was pretty straightforward and the course set-up is very good, so it's playable,'' Pettersen said. ''It's amazing what a difference the wind makes, depending on where it comes from and how strong it is.''