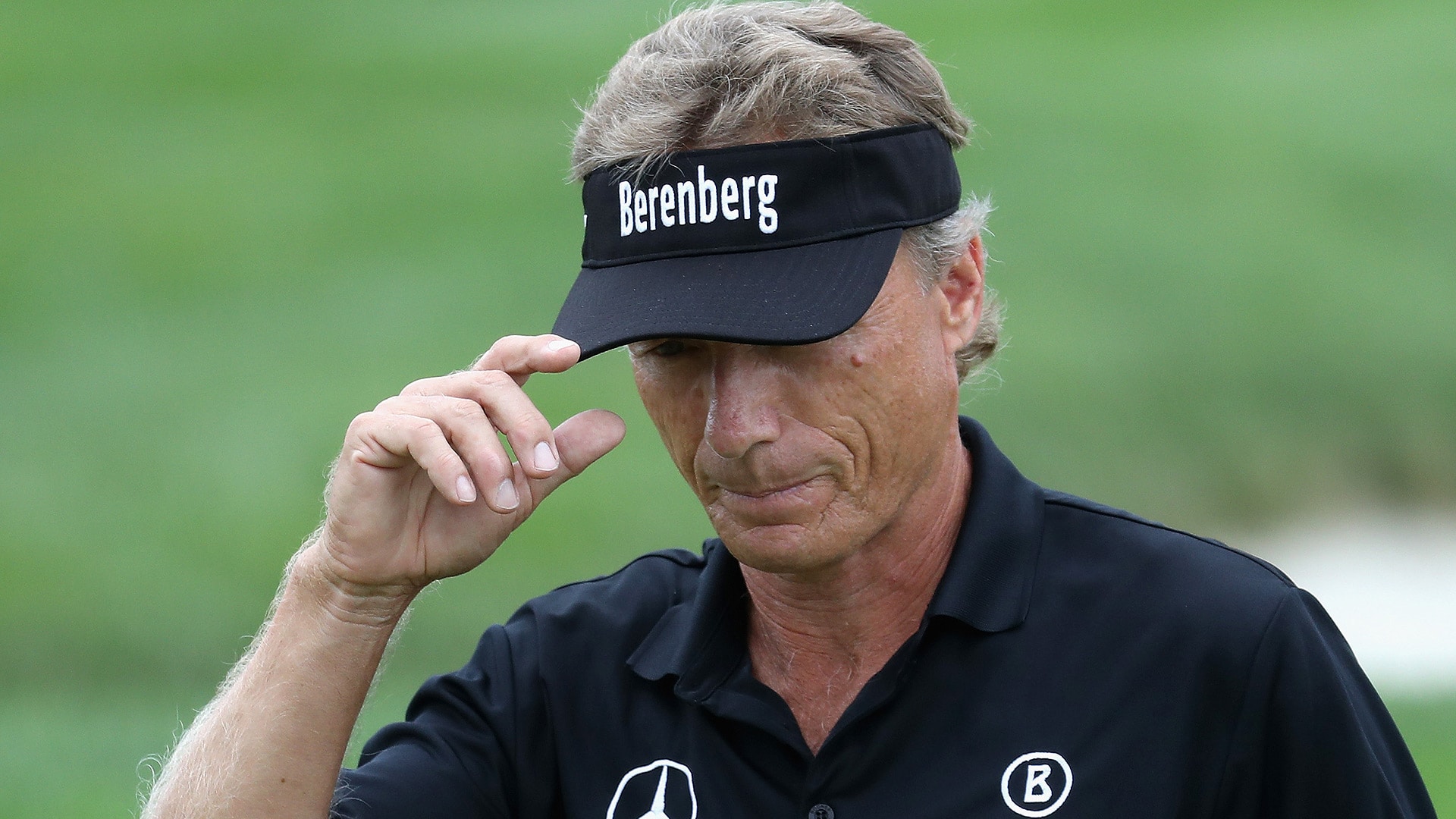 STERLING, Va. - Shrugging off fatigue from last week's victory, Bernhard Langer shot a 7-under 65 Thursday to take a two-shot lead in the first round of the Senior PGA Championship

The 59-year-old German could break Jack Nicklaus' record of eight senior majors with a win at Trump National. He tied Nicklaus last week with a five-shot victory at the Regions Tradition. He would also become the first player to win all five of the current senior majors.

Langer started with five straight pars on a cool, misty morning before sparse galleries. The start was delayed 80 minutes because of overnight rain that saturated President Donald Trump's already-soft course on the shores of the Potomac River, about 25 miles from Washington.

''I was really tired on Monday and Tuesday, really low on energy,'' Langer said. ''Today, I felt fine. I got up early at 5 a.m. and went through my stretching routine and stuff and then heard about the delay, so sat around for an hour and a half, got all stiff again, so that part didn't help.''

Langer's lead held up as afternoon thunderstorms halted play for the day with half of the 156-man field still on the course.

Langer pumped his fist when he rolled in his first birdie, an 18-footer at the par-4 sixth hole. That started a run of six birdies in eight holes that tied him for the lead at 5 under. He missed only two fairways and just one green in regulation, leading to his only bogey.

''I hit a lot of good putts,'' Langer said. ''There was one or two other ones that actually I thought I made them and they just went over the edge, or one actually lipped out, but I also had two or three that went in that don't go in every day.''

''I had a very good yardage,'' Langer said. ''I knew if I hit it somewhat solid it should land near the hole and it landed perfectly.''

The PGA of America allowed players to lift, clean and place their golf balls in the fairways and moved up some tees on the soggy course so that it played at just under 7,000 yards.

''They shortened the course quite a bit and it turned out to be such a nice day, the course played incredibly short,'' said Tom Lehman, who was two shots back after a 67.

Lehman briefly had the lead until he chunked a 4-iron into the water on 18, leading to a bogey.

Lee Janzen, Scott McCarron and James Kingston also were two shots behind Langer. Kingston, a South African who got into the field by finishing among the top 20 in money on the European Senior Tour, tied Langer at 7 under before two late bogeys.

Among the players who didn't finish, Larry Mize had the best round going at 5 under through 10 holes. Miguel Angel Jimenez was among the group at 4 under, playing alongside John Daly and defending champion Rocco Mediate, who were both 1 under.

Langer has 31 career victories and $22 million in earnings on the PGA Tour Champions, trailing only Hale Irwin's 45 wins and $27 million. He has topped the money list eight times in nine seasons.

''I feel like Bernhard is catchable, but you've got to play awfully, awfully well,'' Lehman said. ''He's accomplished so much, but yet I think we all still feel that he can be beat. It's just that you need to play really well to do it.''