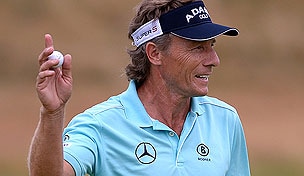 PEBBLE BEACH, Calif. – Bernhard Langer birdied his first four holes and finished with a 9-under 63 to open a four-stroke lead Friday in the Champions Tour's First Tee Open.

The 56-year-old German star, a two-time winner this year on the 50-and-over tour, had nine birdies in his bogey-free round at Del Monte Country Club. He had a 6-under 30 on the back nine – his opening nine.

''I got off to a fantastic start today, with birdies on the first four holes,'' Langer said after playing Del Monte in tournament competition for only the second time in his career. ''Conditions were very nice, although the wind picked up later in the round.''

Langer, who hadn't played in the tournament since his first event on the Champions Tour in 2007, also missed several birdie attempts while flirting with a sub-60 round.

Prior to his 2007 Champions Tour debut, Langer last played on the Monterey Peninsula in the 2000 U.S. Open at Pebble Beach.

Scott Hoch birdied the ninth hole – his final hole of the day – to shoot a 2-under 70 for the low round at Pebble Beach. Hoch was the only player among the top 22 scorers who played at Pebble Beach.

Triplett, who like Langer started on the back nine, had four straight birdies, beginning at the 17th.

''I had a few loose shots and left a lot of birdie opportunities out there,'' Triplett said. ''The greens were excellent and receptive and they were a little first firmer this year.''

Lehman had a back-nine 32. He finished with seven birdies and two bogeys.

''I played really well and was really pleased with everything,'' Lehman said. ''Even the two bogeys I made were a little just out of luck. I had good shot and a few just bounced over the greens.''

The final round will be played Sunday at Pebble Beach.