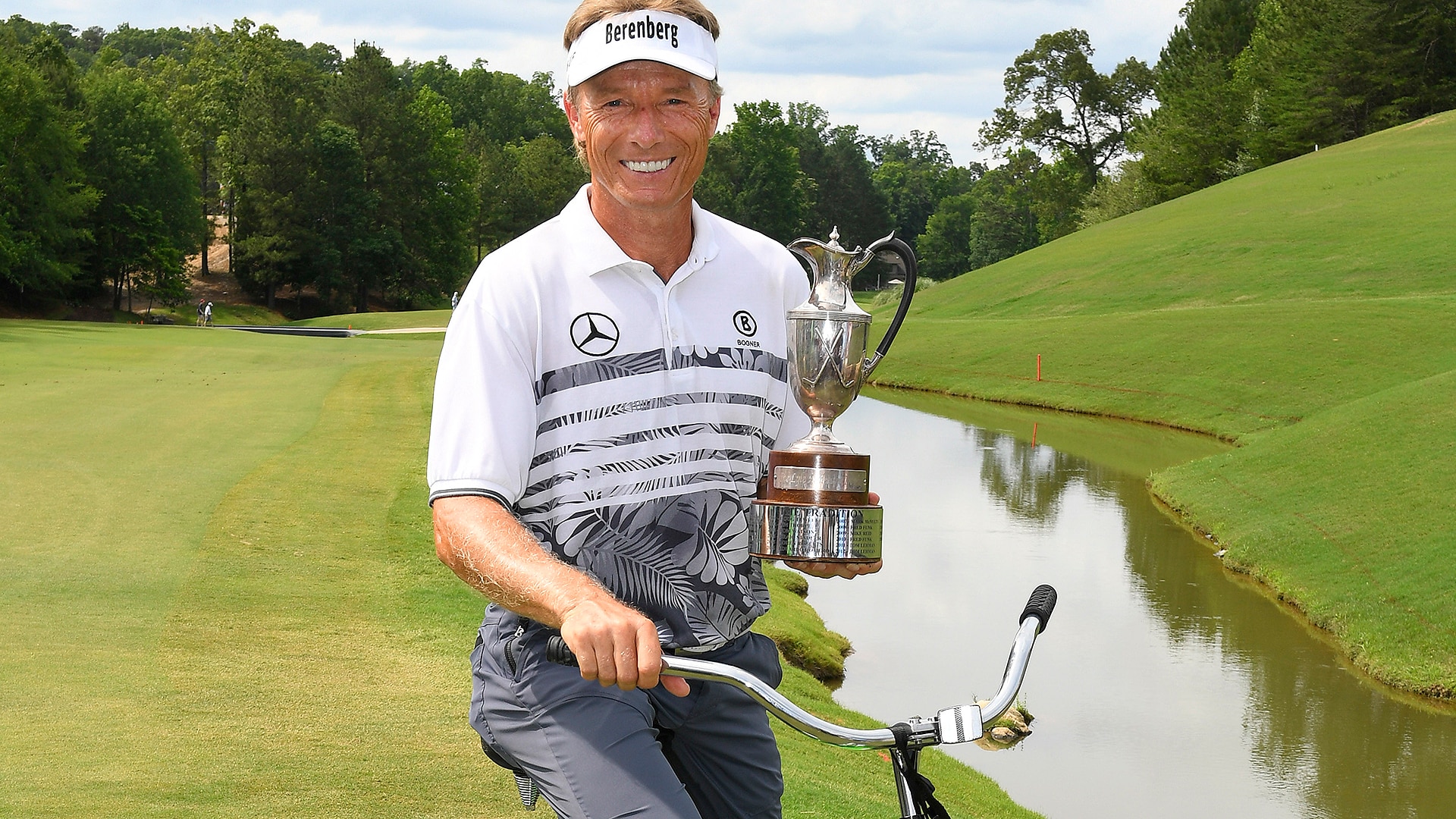 BIRMINGHAM, Ala. - Bernhard Langer pulled away from the other contenders - and pulled even with Jack Nicklaus.

''Yeah, that's pretty neat,'' Langer said. ''Not many people can say they match Jack Nicklaus in anything. To have won as many majors on this tour as he has is outstanding obviously and a thrill for me.

''I'm still way behind on the regular tour, though, in majors.''

The 59-year-old German star was way behind at times in this one, too.

He wiped out a six-stroke deficit over the weekend and entered the final round two strokes behind Fred Funk, but once again made sure there was no drama. He finished at 20-under 268 for a five-stroke victory over Scott McCarron (69) and Scott Parel (70), after winning last year by six.

It's the first time Langer has won a major after coming from behind on the final day.

He wasn't challenged after a birdie on the 12th, when Funk had a triple bogey. Suddenly, Langer led by three strokes over Parel and four over Funk.

''Obviously, it was huge for me and terrible for Fred because up until then, it was neck to neck,'' Langer said. ''Even Scott Parel was right in there as well. There were plenty of holes to be played, so nobody really had their nose in front by a great deal.

''When I made birdie and Fred made triple bogey, that was a big swing in my favor. At that point, I jumped ahead and then I never relented.''

Langer has eight straight rounds in the 60s since the tournament moved to Greystone. He took command on 12 and followed with two straight birdies and another with a tap-in on No. 17 after just missing an eagle.

It was his third par-3 birdie of the round.

Langer has 31 victories on the 50-and-over tour, also winning the season-opening event in Hawaii in January. The Hall of Famer won the Masters twice for his lone regular majors, leaving him 16 behind Nicklaus.

Funk shot a 72 to tie for fourth with Marco Dawson (66). He lost a share of the lead with the messy 12th after his drive went out of bounds and Langer took his first solo lead.

Funk, who ranks as the tour's most accurate driver, said he was baffled by the mistake and that he was feeling relaxed at the time.

''Well, it was a close battle, but I hit it out of bounds so it was all over for me at that point,'' said the 60-year-old Funk, who was seeking his first individual title since 2012. ''He makes birdie, I make 7. I'm one back, now I'm way back so it's all over. I never hit it out of bounds even on the tightest holes.

''That hole, I don't know what happened. It was just a weird deal.''

Funk had been 2-for-2 in protecting 54-hole leads in PGA Tour Champions majors, and the third-round leader had won the Tradition five years running.

McCarron had a chance for a solo second but sent his approach on No. 18 sailing into the grandstands. He had banked in an eagle on that hole on Thursday.

''I had like 235 or something like that to the hole into the wind uphill and I absolutely just smashed a 3-wood,'' McCarron said. ''I don't know what happened. I think I blanked out or something and just killed it up in the grandstands, and then had a very fast putt there.''

Parel had seemed an unlikely contender after making the field with Fred Couples' withdrawal and his $184,000 payday was the biggest of his career. He qualified through Q-school in 2016 but couldn't hold off or ultimately catch up to Langer.

''Bernhard played unbelievable,'' Parel said. ''I mean what can you do? You shoot 64 and you're in the last group, you're probably going to win. Not much you can do about that.''