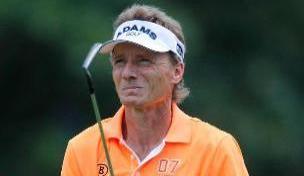 KAUPULEHU-KONA, Hawaii - Bernhard Langer birdied five of the last six holes Sunday to pull away from Fred Couples and Jeff Sluman and win the Mitsubishi Electric Championship by three strokes.

The 56-year-old German shot his second straight 64 in the final round of the winners-only event that opened the 35th season of the Champions Tour. He finished with a 54-hole total of 22-under 194 at Hualalai.

''It's a new year and my goal was to get over the hurdle and win as soon as possible,'' said Langer, who won here five years ago. ''I'm very pleased and extremely blessed to play golf like this. To be 22 under doesn't happen very often.''

Langer, who is 41 under in his last seven rounds at Hualalai, earned his 19th senior victory, but first since April despite a string of top-10 finishes the last half of 2013.

He and Couples shared the lead at 14 under going into the final day under ideal conditions. Sluman was two back, but surged ahead at the turn, his fifth birdie putt taking him to 17 under. All but one came from inside 6 feet.

''My iron shots were pretty bueno on those,'' said Sluman, who was making in his 80th consecutive senior start. He has been among the tour's top 20 money winners the last five years.

Langer and Couples caught him at 18 under with birdies on No. 13.

Langer just kept rolling, two-putting for birdie on the next hole to grab the lead alone, then draining three more birdie putts from inside 12 feet.

Sluman closed with a 65. Couples, looking for his 10th Champions win and second in a row, had a 67. After playing Hualalai's par 5s in 6 under on the opening day, he was just 4 under combined the final two days.

Two-time senior Player of the Year Jay Haas made a late charge after parring all but two of the first 12 holes. He birdied the 13th, then chipped in for eagle and birdie to get within two on the 16th hole.

He could make up no more ground on the streaking Langer. Haas, one of eight 60-year-olds in the field of 41, birdied the final hole to shot a 65 and finish fourth at 199.

First-round leader Rocco Mediate also got within two with his seventh birdie of the day, at the 15th, but parred the final four. He shared fifth with David Frost - who lost a playoff with John Cook here last year - at 16 under.

Langer, who earned $307,000 for the win, came up a shot short of making playoffs at both Hawaii senior events last year. The seniors play here again Sept. 18-21 in the Pacific Links Hawaii Championship at Kapolei.

The next tour event in Hawaii is the LPGA Lotte Championship, April 16-19 at Ko Olina.