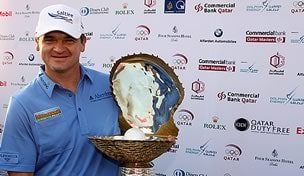 Getty Images
ROGERS, AR - SEPTEMBER 11: Ai Miyazato of Japan watches her drive from the 16th tee during first round play in the P&G Beauty NW Arkansas Championship at the Pinnacle Country Club on September 11, 2009 in Rogers, Arkansas. (Photo by Dave Martin/Getty Images)  -

DOHA, Qatar – Former British Open champion Paul Lawrie chipped in for an eagle and a birdie on his way to winning the wind-shortened Qatar Open on Sunday, shooting a 7-under 65 to hold off the challenge of Jason Day and Peter Hanson who finished four shots back.

Lawrie finished with a 15-under total of 201 to win his seventh European Tour event and his second in Qatar.

The victory is Lawrie’s second in a year – he also won the Andalucian Open – after a nine-year drought. Now in the top 45, he could contend for a spot at the 2012 Ryder Cup.

“I played lovely all week. But today I think tee to green, apart from my tee shot on 10th, I can’t play much better than that,” said Lawrie, who also won the tournament in 1999. “I actually felt I left three or four putts out there and got it around to 7 under on a golf course where the greens were pretty firm.”

The 1999 British Open champion came into the final round with a one-shot lead over Nicolas Colsaerts. Lawrie started slowly with only a birdie on his first eight holes but, just as several players including Sergia Garcia (68), were challenging for the lead, Lawrie sank a 20-yard chip for eagle on the ninth hole to go up by two.

He never looked back, even as Day (65) and Garcia continued sinking birdies. He ran off four birdies himself on a flawless back nine that included clutch birdie putts on 11 and 14. And when Hanson chipped in for eagle on 16 to draw within three, Lawrie responded with chip in for birdie on 17 go to up by four. He played it safe on No. 18 and closed out with a short par putt for the win.

Early on, it looked like Garcia might overtake Lawrie for the win. The Spaniard opened with six birdies on his first 11 holes, including one on 10 that tied him for the lead with Lawrie. But then Garcia’s putter went cold on the back nine, starting when he missed a 2-footer for par on 13.

Clearly flustered, Garcia then missed a 10-footer for birdie at the next hole. He took himself out of contention when he bogeyed the next hole and finished tied for fifth.

Day also started strong, with four birdies on his first four holes to move up the leaderboard. The 23-year-old Australian bogeyed 9 but bounced back with four straight birdies to close within two shots of the lead. But then he missed birdie putts on 15 and 17 to fall out of contention.

Hanson, who came into the final round two shots back, quietly made a move when he ran off two birdies to finish the front nine. He stumbled with a bogey on 13 only to recover with a birdie on 14 and then a chip in for eagle on 16.

First round leader John Daly (67) also remained in the hunt all day, sinking a 12-foot birdie to go 8 under and then sank a 25-footer from the fringe on 17 for another of his four birdies on the back nine. But his great putting was undone by two bogeys on the front nine.

The tournament was disrupted by wind all week, and organizers called off Friday’s play and shortened the event to three rounds. Conditions improved Saturday and were calm Sunday. 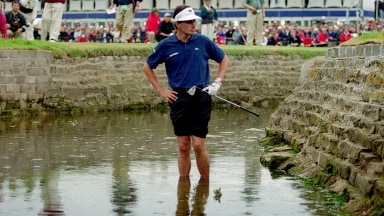 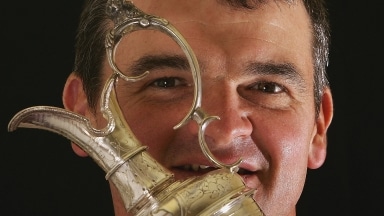 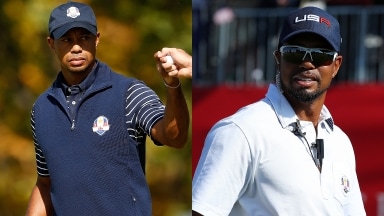