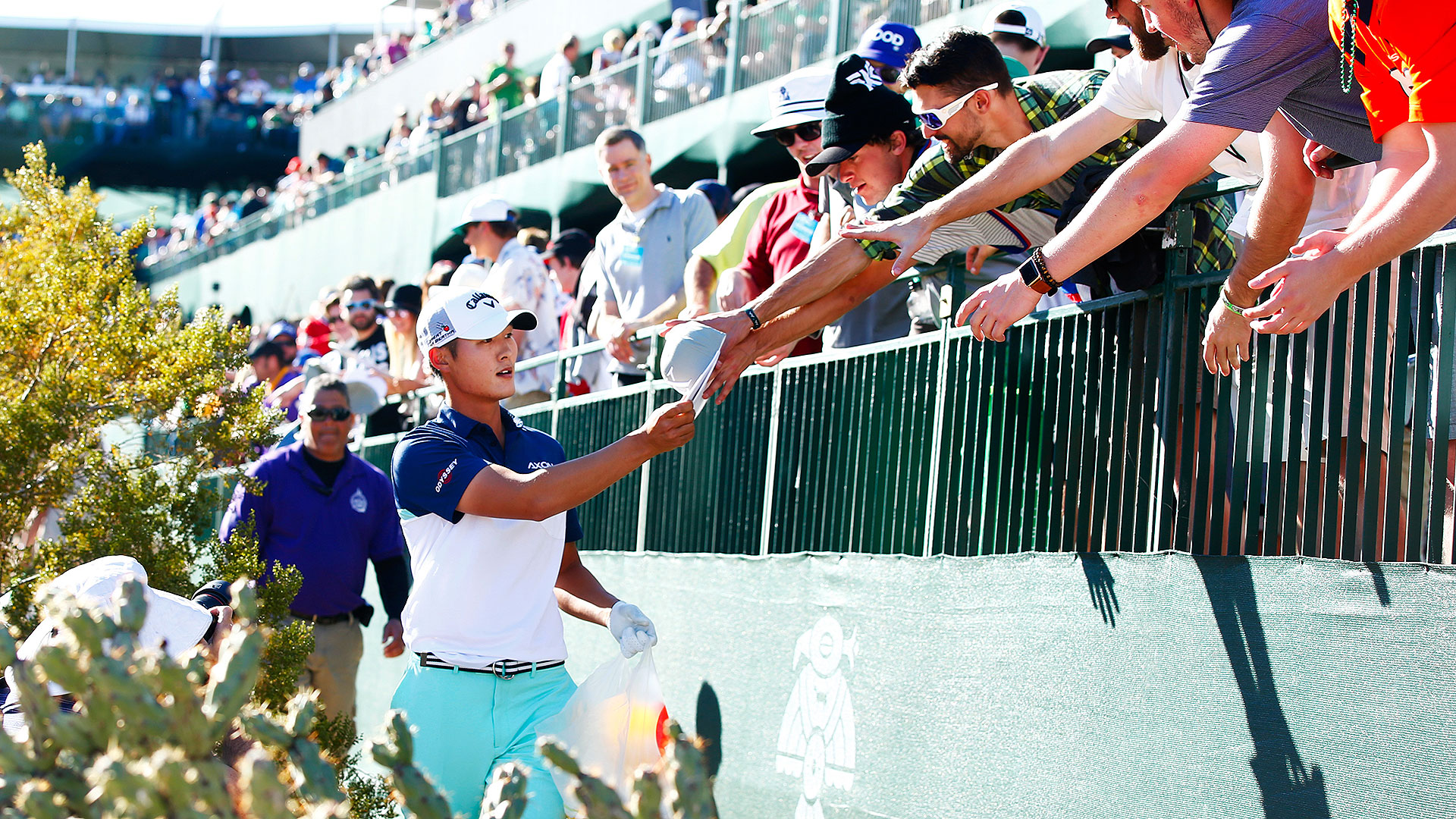 SCOTTSDALE, Ariz. - Danny Lee knew there was a huge crowd Saturday at the Waste Management Phoenix Open. He still was amazed when told just how many people packed TPC Scottsdale's Stadium Course.

Actually, an estimated 201,003 - the largest crowd in golf history.

Lee had some pretty good numbers of his own on a sunny, warm afternoon at golf's biggest party, shooting a 4-under 67 to move three strokes ahead of friend Rickie Fowler and Hideki Matsuyama with one round left.

''Taking slow breath out there really helps,'' Lee said about the wild atmosphere.

''I'm just trying to enjoy myself and I am,'' Lee said. ''It's so much fun out there, so many people just cheering for Rickie instead of me, unfortunately. But I'm having fun.''

''Winning at the Greenbrier Classic gave me a lot of confidence,'' Lee said. ''It kind of taught me how to be on the top and what I need to work on and what it takes to win a golf tournament.''

He's making his fourth appearance in the event after missing the cuts the last three years.

''I always struggled with my tee-shot game out here,'' Lee said. ''This week, I have been driving it really nicely.''

Fowler parred the final five holes for a 70. Matsuyama had a 68.

''I just didn't get much out of the round,'' said Fowler, at No. 4 the top-ranked player in the field. ''Just kind of managed it well and played with what I had to get around.''

Second-round leader James Hahn had a 74 to fall into a tie for seventh at 7 under. Tied with Lee for the lead at 12 under after the 11th hole, he dropped five strokes on the next three holes.

Hahn bogeyed the par-3 12th and made double bogeys on par-5 13th and par-4 14th. He drove left into the desert on 13, then hit his tee shot out-of-bounds to the right on the long, uphill 14th after a fan distracted him at the top of his swing.

After a three-putt bogey on the par-4 11th left him tied with Hahn, Lee got up-and-down for par from the greenside bunker on 12 to pull ahead. Hahn and Fowler bogeyed the hole from the same bunker.

Fowler got a break on the 15th when his hybrid from the right rough ballooned short and right and stopped a foot short of the water.

He won two weeks ago in Abu Dhabi for his fourth worldwide victory in nine months.

Matsuyama chipped in for birdie on the par-4 14th and two-putted for birdie on 15. The 23-year-old Japanese player tied for second last year, a stroke behind Brooks Koepka.

''I didn't putt very well today,'' Matsuyama said through a translator. ''I didn't drive the ball very well, but I did get it around. I'm happy with that.''

Bryce Molder and Boo Weekley were 9 under. Molder closed with an 18-foot putt on the par-4 ninth for a 64, the best round of the week. Weekley birdied three of the last four holes for a 65.

Phil Mickelson was 8 under after 65. The 45-year-old former Arizona State player made an unlikely birdie on 15 when his hybrid from 255 yards went so far right that it crossed the lake and ended up in the 11th fairway. He hit a wedge to 15 feet and made the putt.

Bubba Watson had his first over-par round ever at TPC Scottsdale, shooting a 73 to drop to 2 under. He shot par or better in his first 36 rounds in the tournament.