Lefty, Stanley eager to get back in action 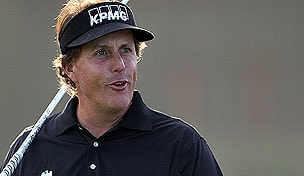 SCOTTSDALE, Ariz. - Kyle Stanley and Phil Mickelson looked forward to fresh starts Thursday in the first round of the Phoenix Open. Defending champion Mark Wilson savored some pleasant memories in his return to the Valley of the Sun.

Stanley was eager to get back on the course after a devastating loss at Torrey Pines on Sunday when he had a triple-bogey 8 on the final hole of regulation and ended up losing to Brandt Snedeker in a playoff.

“That’s the beauty of it,” Stanley said. “I think we’ve got to remember that the year has just started, so I have probably 27 or 28 events ahead of me, and the process doesn’t change, the mindset doesn’t change. I’m playing great golf right now.

“I’m just trying to focus on the positive things I did last week. I mean, I played some really good golf.”

Mickelson missed the cut at Torrey Pines, shooting 77-68 in his hometown event a week after opening the season with a tie for 49th in the Humana Challenge. The former Arizona State star won at TPC Scottsdale in 1996 and 2005.

“I don’t know what happened last week,” Mickelson said after his pro-am round with former NFL star Emmitt Smith. “I’m going to put it as something I’m going to shrug off because I know that my practice sessions have been really good.

“I was able to take it a little bit better to the course today. I hit a lot of good shots today, and bringing it from the practice session and bringing it out on the golf course, that’s my challenge right now.”

Snedeker is trying to look ahead, too.

“The great thing about the PGA Tour and golf is as great as last week was, come Thursday morning it’s not going to matter a bit,” Snedeker said. “It’s a new golf tournament, a new course, and I’ve got to get my mind ready to play, and I feel like my game is really good, so I’m excited about teeing off tomorrow morning.”

Wilson, the Humana Challenge winner in his last start, won last year in a Monday finish, beating Jason Dufner on the second extra hole in the frost-delayed event.

“Last week was the first time I’ve ever had a week off after a win,” Wilson said. “So, I was able to soak it up and enjoy answering all the emails I got from friends and family and enjoy time with the family and just sort of ease into this week. It was a welcome thing to do there, to have a week off.”

The 37-year-old Wisconsin native, one of the Tour’s shortest hitters, is done tinkering with his game.

“I’m not trying to reinvent the wheel every week like I was when I was 30,” the five-time Tour winner said. “I don’t do that anymore. I just do the same things over and over again.”

Sixth-ranked Webb Simpson also is in the field along with FedEx Cup champion Bill Haas, PGA winner Keegan Bradley, Bubba Watson, Ian Poulter, Matt Kuchar and two-time winners J.B. Holmes and Vijay Singh. Simpson and Johnson are the only players in the top 10 in the world ranking in the field.

Holmes is making his second start since having brain surgery in September. The 2006 and 2008 Phoenix winner had structural defects in the cerebellum, the part of the brain that controls balance. He missed the cut at Torrey Pines, shooting 76-69.

“It was great to just get back at it last week. Hopefully, I can improve on that,” Holmes said. “I didn’t play that great, but it was just nice to get back out there and get back in the swing of things.”

DIVOTS: Watson turned heads Wednesday when he pulled into the players’ parking lot behind the wheel of the first “General Lee” from the “The Dukes of Hazzard” TV show. Watson paid $121,000 - including fees - for the 1969 Dodge Charger at Barrett-Jackson’s recent Scottsdale auction. “Lee 01” jumped over a police car in the series’ first episode. … Fred Couples, in the field on a sponsor exemption, withdrew Wednesday because of illness. He was replaced by Ken Duke. … Nick Watney withdrew Tuesday, also because of illness. He was replaced by Jarrod Lyle. … Three-time winner Mark Calcavecchia, rookie Harris English and former Arizona State players Jeff Quinney and Matt Jones also received sponsor exemptions.