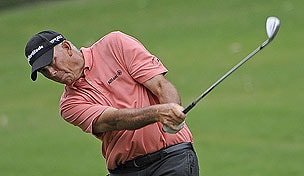 Getty Images
AUGUSTA, GA - APRIL 10: Lee Westwood of England looks on from the 11th fairway during the third round of the 2010 Masters Tournament at Augusta National Golf Club on April 10, 2010 in Augusta, Georgia. (Photo by Andrew Redington/Getty Images)  -

PEBBLE BEACH, Calif. – Tom Lehman made a 20-foot birdie putt on the final hole at Pebble Beach on Saturday for his second straight 5-under 67 and a one-stroke lead in the Champions Tour's First Tee Open.

Lehman, the seven-time Champions Tour winner and former British Open champion, had a 10-under 134 total after rounds at Del Monte and Pebble Beach.

''To play Pebble Beach in beautiful conditions is a pleasure and a treat,'' said Lehman, winless this year. ''The greens are first and fast, the fairways are firm and fast. It plays like it's supposed to play and I just love the challenge.''

Russ Cochran, The Principal Charity Classic winner in June in Iowa, also shot 67 at Pebble Beach. The left-hander made a 60-foot birdie putt on the par-3 seventh, his 16th hole of the day.

''I got off to a really solid start and kept the ball below the hole,'' said Cochran, a four-time winner on the 50-and-over tour. ''The greens are in great shape and I got lucky to make some putts on the front side. ... Pebble reacts to the weather. On the PGA Tour in February, it's a little more of handful than it is now.''

Lehman won the 1998 Callaway Invitational, an unofficial multiple-tour event at Pebble Beach. He was second in the PGA Tour's 2003 AT&T National Pro-Am and tied for sixth in the 1992 U.S. Open at Pebble Beach.

The defending Charles Schwab Cup champion played as consistently as his scores indicate. He has hit 30 of 36 greens in regulation, the best in the field.

''It's too early to talk about winning,'' Lehman said. ''There's a lot of golf to play and a lot of great players. I know it will be a tough day and I will have to play well.''

Defending champion Kirk Triplett and first-round leader Bernhard Langer were three strokes back at 7 under. Triplett had a 70, and Langer followed his opening 63 with a 74. They also played Pebble Beach, the site of the final round Sunday.

Lu, who trailed Langer by eight shots after the first round, moved into contention with three birdies and an eagle on the first four holes of his back nine, but bogeyed two of his last three holes.