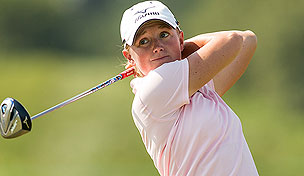 Lewis shot a 7-under 65 on Saturday to take a two-stroke lead over Angela Stanford in the Navistar LPGA Classic, while second-round leader Lexi Thompson fell five shots behind.

Lewis is trying to complete an Alabama sweep after beating Thompson by a stroke in the Mobile Bay LPA Classic in late April. The former Arkansas star also won the ShopRite LPGA Classic in June in New Jersey.

Lewis birdied four of the first five holes in her bogey-free round and had a 15-under 201 total on The Senator course at the Robert Trent Jones Golf Trail's Capitol Hill complex.

''I knew going into today I needed to make birdies, just the way the scores had been all day,'' said Lewis, who worked overtime on her putting Friday after a second-round 70.

''I wasn't happy with the way I played the back nine yesterday. Putts weren't going in. They were going to the edge and not going in, so I worked on some basics yesterday.''

''I think coming back out and getting birdies on the first two holes really gave me some momentum and confidence,'' she said.

The 17-year-old Thompson had a 74 to drop into a tie for sixth at 10 under. Thompson won the event last year at 16 to become the youngest champion in LPGA Tour history, a mark broken last month by 15-year-old amateur Lydia Ko in the Canadian Women's Open.

Thompson opened with a career-best 63 on Thursday to match the tournament record, and followed with a 69 on Friday. She made a double bogey on the par-4 12th Saturday, and offset two birdies with two bogeys.

''I just struggled a little bit,'' Thompson said. ''I'm definitely not out of it. I shot 63 the first day, so if I have a round like that, I can be in contention. I'm just going to go out and free swing and try to make birdies. Hopefully, a few more putts drop.''

Sarah Jane Smith and Hee Young Park joined Thompson at 10 under. Smith had a 68, and Park shot 72.

Top-ranked Yani Tseng was 5 under after a 70.