Lewis trails Feng by one in China 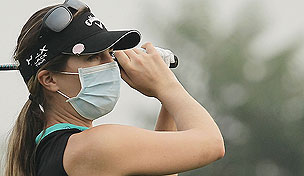 Getty Images
CARMEL, IN - SEPTEMBER 9: Rory McIlroy of Northern Ireland hits his second shot to the 18th green during the final round of the BMW Championship at Crooked Stick Golf Club on September 9, 2012 in Carmel, Indiana. (Photo by Stan Badz/PGA TOUR)  -

BEIJING – Shanshan Feng shot a 9-under 64 Saturday to take a one-stroke lead over Stacy Lewis after the third round of the Reignwood LPGA Classic.

Shrouded in the Chinese capital's notorious smog, Feng carded nine birdies in a bogey-free round for a total of 21-under 198, boosting the chances of a home winner in the first LPGA tournament played in the country.

Feng was in a two-way duel with Lewis all day before grabbing the outright lead for good with a birdie on 16. Both players added birdies on the final two holes, making for a total of eight for Lewis, who remains bogey-free in the tournament.

Feng said she anticipated a similar duel in Sunday's final round.

''I've played Stacy many times. I know she's a very aggressive player, and I know that on this course she could definitely drain a lot of birdies and chase back. I knew the lead wasn't secure,'' said Feng, who won last year's LPGA Championship to become the first Chinese major winner. ''A one-stroke lead is very small. There are 18 holes tomorrow so there's still a challenge. If the conditions are right, you can get a very low score on this course.''

The start of play was delayed because of the high levels of smog, and poor visibility dogged the course for most of the day. Several players donned surgical masks in hopes of filtering out some of the pollution.

Top-ranked Inbee Park was another four strokes back in third after finishing with four straight birdies for a 66.

Park had a slow start to the tournament, with first and second rounds of 69 and 68, but found her rhythm with birdies on five of the first seven holes. She then made two bogeys before her run of birdies at the end.

''I got off to a good start and then in the middle I was slower and at the end of the round, everything went in,'' Park said. ''My putter just didn't want to go in for six or seven holes.''

Park has won six tournaments this season, including three majors, but has struggled to maintain her dominant form over the last two months.

Australia's Karrie Webb was seven shots back in fourth. Overnight leader Jessica Korda of the U.S. slipped to sixth after a 76 that included a double bogey and four bogeys.

Another Chinese player, Xiyu Lin, was tied for seventh at 10 under along with Pornanong Phatlum of Thailand.