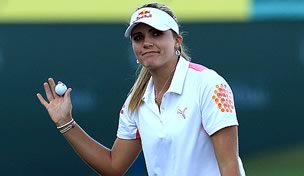 DUBAI, United Arab Emirates – American teenager Lexi Thompson held on for a one-shot lead at the Dubai Ladies Masters on Friday after sinking a birdie putt on the 18th for a 2-under 70 in the third round.

The 16-year-old Thompson, the youngest LPGA winner, is at 206 overall, one shot ahead of Sophie Gustafson (69). Thompson is looking to become the second youngest winner on the European Tour, only three months after she won her first LPGA event in Alabama to make history on that tour.

“I hit it pretty well. I just left a few putts out there but a lot of girls are in contention so it will be a great day out there,” Thompson said. “I’m just going to try and make birdies throughout the whole day, play consistent. Pars, birdies nothing can be worse than that.”

Thompson led by two shots going into the third round but she opened with a bogey after driving behind some trees and failing to make a 4-foot putt.

She pulled a shot back with a birdie on the third hole but couldn’t shake the 38-year-old Gustafson. On the 18th, Thompson unleashed a 3-wood that cleared the water and landed on the edge of the green. She missed a 35-foot eagle putt but still birdied the hole.

“Once I saw the drive, I was like, all right, I probably can go for it from there and it was 212 (yards) to the pin,” Thompson said. “I figured my 3-wood for sure was going to get there … I was pretty much like, ‘Let’s just hit it. You’ve been hitting it pretty good, so just got to be confident.”’

Looking for her first tour win of the year, Gustafson said she was happy with a round that included five birdies to go with two bogeys. The Swede had a chance to keep pace with Thompson on the 18th but missed a 10-foot birdie putt.

“Started off a bit iffy but figured it out pretty quick and was solid from there,” Gustafson said. “Obviously Lexi is going to be hard to beat. But if I can keep playing well, then I think I have a good chance.”

Lee-Anne Pace (67) and Pernilla Lindberg (68) are two shots behind Thompson.

Pace, the 2010 tour money winner who twice missed winning putts this year on the tour, moved into contention with a bogey-free round that included five birdies. She also is looking for her first win this year and said a victory at the $650,000 tournament would be her biggest yet.

“It would be amazing. It’s the win I’ve been looking for,” Pace said. “It’s a big one and I’ve played quite well in big events except the British Open and Evian (Masters) this year. So it would be absolutely amazing to finish and win.”

Lindberg, one of four Swedes within six shots of the lead, said she expects to contend Sunday after four straight top-10 finishes on the tour.

“I was 1 over at the turn and 5 under on the back nine so I caught on fire on the back nine,” Lindberg said. “I made a good birdie putt on 10 and just kept going from there. I had a lot of good looks for birdies on the back nine. It was a little rough to start off with. I missed some greens and up and downs but I got better as the day went on.”

It was another inconsistent day for Michelle Wie (71), who is five shots off the pace at 5 under. Struggling much of the year with poor play that has seen her drop to 17th in the world rankings, Wie dropped a shot on the front nine before carding all her three birdies to go with a bogey on the back.

“It’s pretty frustrating,” the American said. “But at least I made a birdie on the last hole, made me feel good about myself. But tomorrow I just got to go out there and really shoot low.”