Lincicome in the Mizuno mix after Round 2 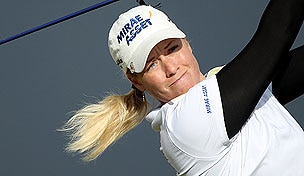 SHIMA, Japan - Yuki Ichinose of Japan shot a 6-under 66 to finish in a three-way tie for the lead after the second round of the Mizuno Classic on Saturday.

Ichinose carded seven birdies against a lone bogey at Kintetsu Kashikojima to finish at 8-under 136 with compatriots Mamiko Higa, who also shot a 66, and overnight leader Shiho Oyama (68).

''My putting felt really comfortable before the round and that gave me the confidence to play strong today,'' said Ichinose, who earned her first JLPGA victory earlier this year.

American Brittany Lincicome shot a 68 and is one stroke off the pace with Japan's Ayako Fujimoto (67).

Defending champion Stacy Lewis, who erased a seven-stroke deficit last year, shot a 68 and is tied for 10th at 139. The American is the highest-ranked player in the field at No. 3.

South Korean star Inbee Park, who leads the money list and player of the year rankings, is sitting out the tournament.

Lincicome nearly carded her first bogey of the day on the par-5 18th hole when she overshot the green on her third stroke. She pitched her fourth shot 12 feet past the hole, but drained the putt to save par.

Lincicome will be bidding to end a two-year winless drought on Sunday. Her latest win came at the 2011 Canadian Women's Open where she was one-stroke off the lead heading into the final round and defeated Stacy Lewis by one-stroke.