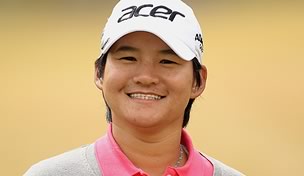 DALY CITY, Calif. – When Yani Tseng found out the Swinging Skirts Golf Team from her native Taiwan planned to host an LPGA event on U.S. soil, she had her initial doubts.

Then, the top Taiwanese women's golfer changed her tune as she realized just how determined this group - a private, Taiwanese nonprofit of amateur golfers – is to promote its countrywomen on the world stage and boost the women's game globally.

''It's pretty easy to talk about crazy people out here,'' Tseng joked Monday in reference to San Francisco's eccentricities and those animated Taiwanese golfers in their plaid skirts. ''It's a long way to come for them in a very short time. I can't believe we're moving the LPGA to San Francisco and the biggest stage in the world. ... For them, I think this is really a dream come true. To become world No. 1 (is a goal) I feel I can reach. For them they're just a golf team. When they talked about having an LPGA tournament I thought they were crazy.''

Tseng and her counterparts are thrilled to take part in April's inaugural $1.8 million, 144-player Swinging Skirts LPGA Classic at Lake Merced Golf Club outside San Francisco, marking the LPGA's return to the Bay Area for the first time in four years. It also is the first LPGA event in the United States led by a Taiwanese organization.

And organizers, local politicians and course officials hope the LPGA will stay put at Lake Merced for the long haul.

''Over the past three years the Swinging Skirts organization in Taiwan has successfully organized three tournaments in Taiwan,'' said David Lee, a Taiwanese ambassador. ''This has significance trying to bridge the East and West, especially Taiwan and the U.S.''

The last LPGA event in the area was the 2010 CVS/pharmacy LPGA Challenge at Blackhawk Country Club in Danville.

''I hope this is the first of many. Four years is too many not to have the LPGA,'' San Francisco Mayor Ed Lee said.

Tournament executive director Kevin Hopkins has said the goal is to reach a long-term agreement with Lake Merced Golf Club following the first tournament. The club has a 92-year history.

''Lake Merced, Daly City, San Francisco, what an unbelievable place to be. We couldn't be more proud to bring this tournament here,'' Hopkins said. ''This event is going to be a unique one. It's going to showcase San Francisco and Taiwan to the world.''

Swinging Skirts Chairman Johnson Wang is an art aficionado, so there will be sculptures around the par-72 course.

Wang shared the story of one of his team's 60 members - they are known for wearing colorful skirts or kilts on the course - who struggled with his resume before learning to play golf and becoming a better writer.

''Playing golf is just like breathing air for the Swinging Skirts members,'' Wang said. ''We hope from this point on we'll make this event successful and continue to grow this event.''