Peterson shot an even-par 72 - playing the back nine in 4 under - to finish at 5-under 211, a stroke ahead of UCLA’s Patrick Cantlay at difficult Karsten Creek.

Six hours after Peterson finished, Cantlay had a chance to force a playoff, but his 18-foot eagle try on the par-5 18th grazed the cup and stayed out. He birdied the final two holes for a 71.

Peterson opened with a 74 and had a competitive course-record 65 on Wednesday. 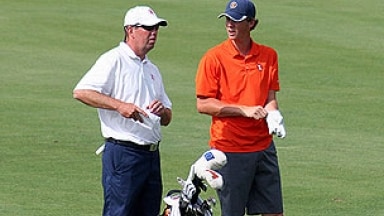 With Illinois' unexpected appearance in the NCAA men's Championship on Sunday, coach Mike Small will have to decide whether he wants to deal with more stress and play in the U.S. Open sectional qualifier on Monday in St. Louis. Its not the dream matchup we all expected, but on Sunday morning No. 2 Alabama will square off against No. 26 Illinois for the NCAA men's Championship.

With so much negative news about college footbal, as a breath of fresh air, golf gave us Augusta State as a No. 1 for the second straight year.