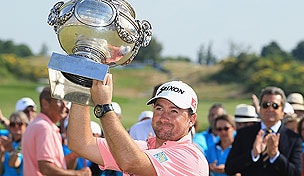 SAINT-QUENTIN-EN-YVELINES, France – Tied with Richard Sterne of South Africa in the final round of the French Open, Graeme McDowell didn't wilt on the back nine.

The Northern Irishman made two of his five birdies on the way home to shoot a 4-under 67 Sunday and capture his ninth European Tour title by four strokes.

Sterne, by contrast, made three birdies on the front nine before faltering after the turn with three bogeys to hit a 71 and finish runner-up.

McDowell won the World Match-Play Championship in May, but missed the cut in his three following tournaments. That could have given rise to doubt on the tough Albatross course of Le Golf National, which will host the Ryder Cup in 2018, but he put that aside to finish in style.

''There was no real panic button,'' McDowell said. ''It's been a funny season. Inconsistent, yes. But when it's been good, it's been really good.''

McDowell played solidly throughout the tournament, making only four bogeys in four rounds. In fifth place after the second round, the 2010 U.S. Open champion started believing in his chances on Saturday.

''The last 12, 13 holes yesterday, I felt the old juices kind of starting to flow again,'' McDowell said. ''I hit a lot of quality shots coming in yesterday, and I got a lot of belief from that. You know, if the putter had been a little hotter perhaps I could have got my nose in front a little earlier in this tournament.''

McDowell and Sterne entered the final round with a share of the lead and both broke away from the field by making two birdies for a three-shot advantage after five holes.

Sterne won the Joburg Open in South Africa and was the runner-up at the Dubai Desert Classic, both in February.

''He really hung in there, played some great golf, and I knew it was not going to be an easy day,'' McDowell said. ''The way he played kind of inspired me to play better, and you know it was a really good battle with him.''

McDowell missed short birdie putts on Nos. 6, 11 and 14. But the Northern Irishman could rely on his accurate long game.

''That was the key really,'' said McDowell, who led the field in hitting greens. ''Short game was tricky around this course. The rough was quite sticky and the greens were quite firm and fast. You had to be very careful to leave the ball on the correct side of the pin, and I hit a lot of greens.''

Sterne initially got the upper hand when McDowell missed a short par putt on No. 7.

But McDowell picked up a shot on No. 10 to draw level with Sterne. He then took sole possession of the lead when the South African sent his tee shot into the thick rough to bogey No. 12.

McDowell smiled when he sank a short par putt on No. 16 to increase his lead to two strokes as Sterne sailed 15 feet past the flag from a chip on the edge of the green to make bogey.

''Fifteen and 16 were just kind of those lucky breaks that you need when you win tournaments,'' McDowell said. ''Fifteen was an average putt which I thought missed and it went in. Sixteen, I still don't know how that putt went in. It was a right-to-left putt that I was trying to hit right edge and I felt like I started it left edge, and it managed to go in.''

McDowell rode the momentum with a birdie on No. 17 while Sterne missed a 4-foot par putt.

After clearing the water hazard on the last, McDowell waved to the crowd on his way to the green with victory just about secured. 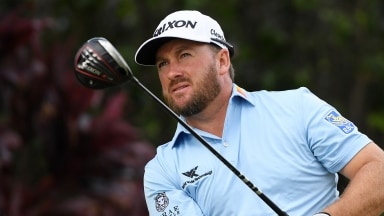