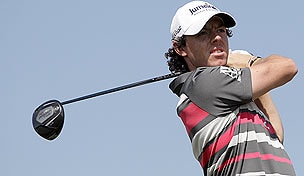 Getty Images
SHANGHAI, CHINA - NOVEMBER 10: Geoff Ogilvy of Australia tees off during the final round of the HSBC Champions at Sheshan Golf Club on November 10, 2008 in Shanghai, China. (Photo by Andrew Redington/Getty Images)  -

LONDON – Rory McIlroy is confident the changes he has made to his swing will click by the time he tees off at the Masters in April.

The 22-year-old Northern Irishman has been working with long-time coach Michael Bannon on improving his swing set-up.

“I still feel it’s going to take a couple more weeks to fully click in and feels completely comfortable but it’s definitely on the right track,” he said.

“Hopefully, there will be a day when it all clicks and it comes easy to me. As for the time being, I still have plenty of swing thoughts I am thinking about out on the golf course.”

McIlroy leaves for the United States on Monday for the WGC-Accenture Match Play Championship, which begins Feb. 20. The Masters begins April 5.

He began his season with a second-place finish in Abu Dhabi and a fifth-place showing in Dubai last week, when he revealed he had been working on a “few fundamentals” in his swing.

“Posture was one of the key things, and just a little bit of swing plane,” McIlroy said Wednesday. “I was setting the club a little steep on the way back, so the club was getting a little bit across the line at the top.

“So Michael (Bannon) and I have been working on me getting more feel, and getting the club pointed a little more left at the top so it’s on the right plane. That’s basically it.”

He added: “I should be well and truly ready for Augusta.”

McIlroy famously collapsed on the final day of last year’s Masters, blowing a four-shot lead with a closing round of 80, but he bounced back two months later by winning his first major at the U.S. Open and finished the year as the No. 2-ranked player.

After a stellar season in 2011, McIlroy believes he is on track at the start of the new year.

“I feel like I have taken big strides this year in my game and in the way I am swinging the club and in my consistency, as well,” he said.

“So I’ve had a second and now a fifth, and even if you don’t have great weeks but then you still managed top-5s that’s not a bad thing.”