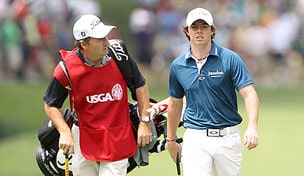 Getty Images
RICHMOND, TX - NOVEMBER 18: Jiyai Shin of South Korea hits a shot during the pro-am prior to the start of The LPGA Tour Championship presented by Rolex at the Houstonian Golf and Country Club on November 18, 2009 in Richmond, Texas. (Photo by Scott Halleran/Getty Images for LPGA)  -

BETHESDA, Md. – Rory McIlroy made six birdies and not a single bogey to lead the first round of the U.S. Open by three shots Thursday over 2009 PGA Championship winner Y.E. Yang and Masters champion Charl Schwartzel.

McIlroy, who blew a four-shot lead in the final round of the Masters, has the largest lead after the first round of the U.S. Open in 35 years.

There’s still a lot of golf between now and Sunday, but there’s no denying McIlroy looks like the player most poised to break through on one of golf’s biggest stages.

This is the third time in the last four majors McIlroy has held the first-round lead. And at this one, his first round at a Grand Slam since the meltdown at Augusta, he didn’t look at all intimidated by either the moment or the long course at Congressional.

“I felt comfortable with my game and comfortable on the golf course,” McIlroy said. “And when you have that combination like that, everything’s OK.”

The Northern Irishman hit 17 greens in regulation and did it from the fairways, which he hit nine times, and the rough, which was thick, but maybe not as vicious as it can be at the typical U.S. Open venue.

He made putts from short and long range and strung together three straight birdies in the middle of his round. He went 18 holes without a bogey – the only player of the 156 in the field who did – a remarkable feat on a course measuring 7,514 yards for the first round.

He played most of the round in breezy conditions that weren’t present in the morning, when Yang was shooting his 68 in calmer conditions. Rain that greeted the players early started again as McIlroy was heading to the ninth green – his last hole of the day – but there was no dampening this effort.

“I have to back it up tomorrow so I can go into the weekend in good position,” he said.

Sergio Garcia, British Open champion Louis Oosthuizen, American Ryan Palmer, Kim Kyung-Tae and Scott Hend were tied for fourth at 2 under; a group of 10 finished another stroke back.

“I just need to keep it going,” he said. “I played really good out there, didn’t make any mistakes, which in a U.S. Open is huge. I’m looking forward to tomorrow.”

Closest to catching him will be Schwartzel, who ended up with a green jacket that could have been McIlroy’s, and Yang, whose 2009 win at the PGA Championship might be better remembered as the one that Tiger Woods lost.

When Yang captured the PGA, it marked the first time Woods failed to win after taking a lead into the last day of a major. Yang hasn’t contended at a Grand Slam tournament since, but said Congressional fits his game better than most courses.

“I’ve been playing more conservatively,” Yang said. “I’m trying to make more pars, less bogeys and I was lucky to make a few birdies. Overall, the course and my approach has worked to my advantage.”

As McIlroy, Yang and Schwartzel showed, there were good scores to be had in the USGA’s first return to Congressional since 1997, when Ernie Els won the championship.

“Any course is a mental grind if you’re not sharp. The U.S. Open is no different,” Westwood said.

Meanwhile, Mickelson and Johnson were supposed to share the stage with McIlroy, but instead ended up as sideshows.

Mickelson opened the day by dropping his tee shot on the par-3 10th into the water en route to double bogey. He spent the rest of the day hitting driver out of the rough, searching for his ball in the weeds and looking for miracle up-and-downs from greenside, among other things. He shot a 3-over 74 that could’ve been much worse.

Johnson, who blew a three-shot lead in the final round of last year’s U.S. Open, will have to do a lot of work to get there this time. He hit two balls into the water on No. 11 – his second hole – and never found his groove. He finished a round of 4-over 75 that, like Mickelson’s, could have been much worse.