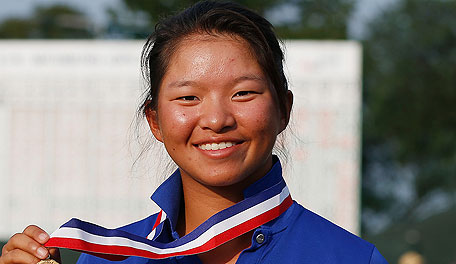 TULSA, Okla. - Stroke-play medalist Megan Khang beat Shannon Brooks, 1 up, on Wednesday in the first round of match play in the U.S. Girls' Junior.

The 17-year-old from Rockland, Massachusetts, is making her record-tying seventh appearance in the tournament. She took the lead with a birdie on the par-5 16th and matched Brooks, from Vienna, Virginia, with pars on the final two holes at Tulsa Country Club.

Thailand's Jaravee Boonchant and China's Muni He also advanced, while fellow 16-year-old Sophie Liu of Canada dropped out. They tied for second in stroke-play qualifying, four stroke behind Khang.

Boonchant beat Beth Lillie of Fullerton, California, 3 and 2; He topped Simar Singh of Los Altos, California, 5 and 4; and Kathleen Scavo of Benicia, California, beat Liu, 2 and 1.

Hannah O'Sullivan, the Chandler, Arizona, player who won a Symetra Tour event in February, also was eliminated. She lost to Mexico's Maria Balcazar in 19 holes.

Ko (not that one) ousts Girls' Junior medalist