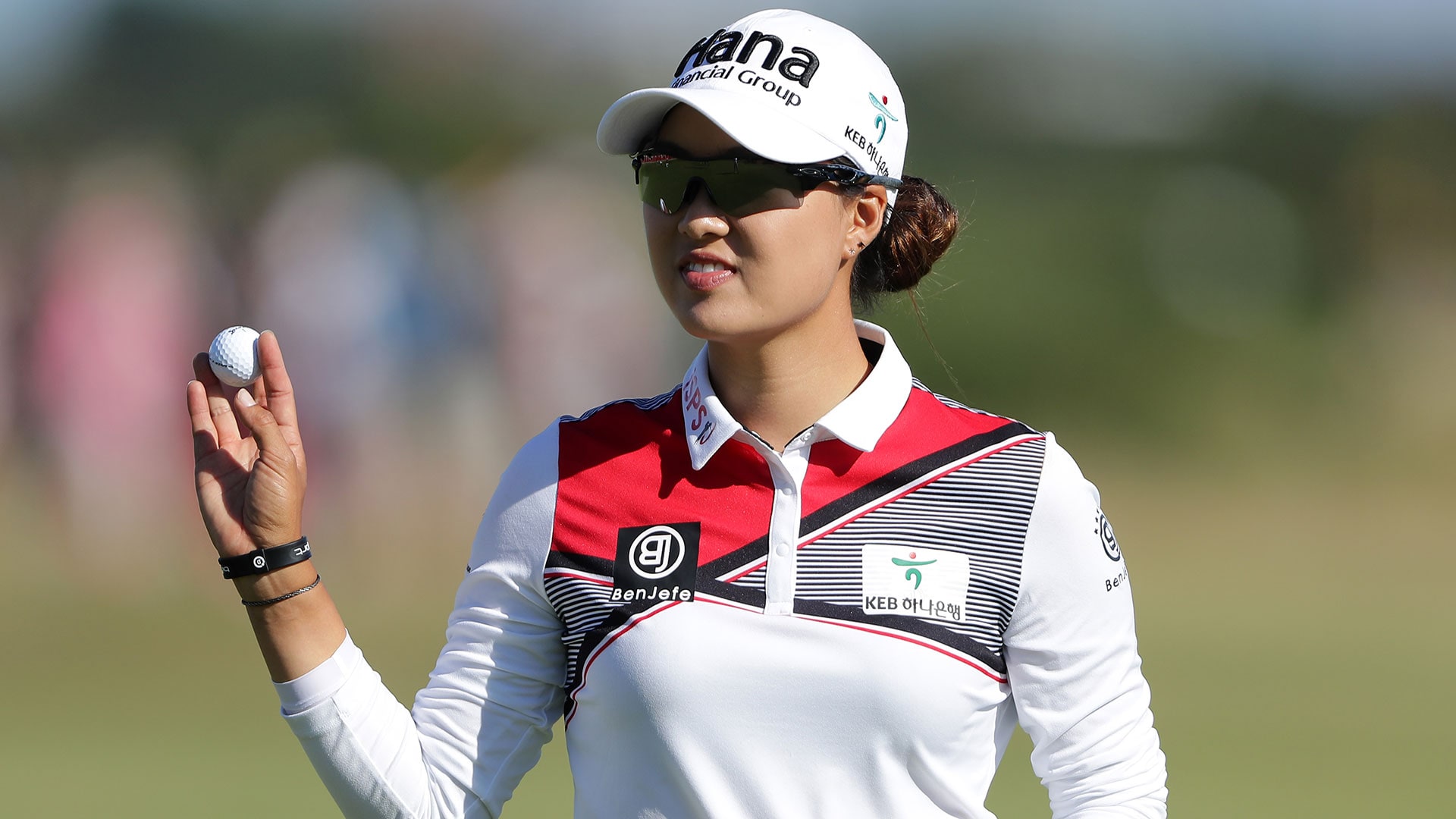 LYTHAM ST. ANNES, England – The big thing missing for Minjee Lee in her impressive season is a victory at a major championship.

She might get it at the Ricoh Women's British Open.

The Australian shot a 7-under 65, including a right-to-left putt for eagle from 25 feet on the par-5 15th hole, to lead by one stroke after the first round at Royal Lytham on Thursday.

Mamiko Higa was a shot behind after a 66, while five players – Georgia Hall, Teresa Lu, Park Sung-hyun, Lee Mi-hyang and Pornanong Phatlum – were a further stroke back on a day that started with showers and a breeze before brightening up.

Top-ranked Ariya Jutanugarn bounced back from a double-bogey 6 at the second hole to shoot 71. Second-ranked Inbee Park dropped four shots in her first five holes in a 76.

Only a series of missed putts stopped Lee from winning the tuneup for the fourth major of the year, last weekend's Ladies Scottish Open on the links at Gullane where Jutanugarn eventually prevailed by one shot.

Still, a closing 66 was another encouraging sign for Lee. She has had one win – at the Volvik Championship – two runner-ups and five top-10 finishes on the LPGA tour this season, is second on the tour's points standings, and arrived at Lytham in a career-high No. 8 in the rankings.

After finishing 25th, 34th and 25th in the first three majors of 2018, Lee is finally in a good position to seriously challenge for a first major title, especially if she keeps up her impressive performance on the greens after needing only 26 putts in the first round.

She was 3 under at the turn after birdies at Nos. 4, 6 and 8, and reached 7 under with that curling eagle putt at No. 15. Another birdie at the next took her further clear, only for a bogey at the par-4 17th to spoil her card.

''I definitely holed a lot of putts from far away, so that really helped me today,'' she said.

''I knew I was hitting it really well coming into this week so I went out there and played my game, which is all I can control. Just having fun out there was my main goal.''

Lee's best result at a major is a tie for third at the ANA Inspiration last year.

Higa, ranked No. 51, also had just one bogey on a course where avoiding the 206 bunkers was the priority. That dropped shot came at the eighth hole but she recovered with three birdies in the following six holes.

Chinese player Yu Liu made the first charge of the day, with three straight birdies from No. 4, and back-to-back birdies on Nos. 14 and 15, moving her to 6 under and into a two-stroke lead at the time. The 18th hole proved her undoing after she pushed her drive into the thick rough, chipped out into a bunker then three-putted for a triple-bogey 7.

Liu's 69 put her in a group on 3 under that also included Brooke Henderson of Canada, Moriya Jutanugarn and two-time major winner So-yeon Ryu. Helped by a hole-in-one at No. 9 with an 8-iron from 140 yards, England's Florentyna Parker also shot a 69.

Michelle Wie withdrew midway through her first round because of a right hand injury. The American was 7 over after 12 holes.