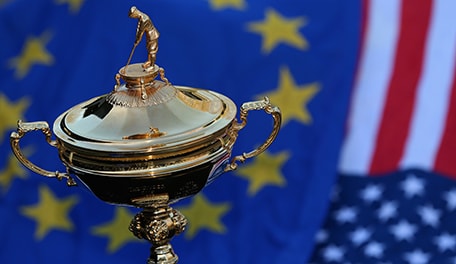 ST. PAUL, Minn. - The 2016 Ryder Cup was awarded to the Hazeltine National Golf Club near Minneapolis years ago, however its promoters quietly recently tried to wedge money into Minnesota's new state budget for logistical assistance and sponsorships of the event.

Although their efforts fell short - the Legislature concluded its session after passing a budget without any money for the prestigious tournament - organizers are expected to continue to push for state assistance before next year's event.

Their pitch - detailed in a private meeting held days before lawmakers adjourned their 2015 legislative session - ran from $600,000 to $2 million depending on the state's involvement and willingness to absorb security costs. Potential benefits would range from the use of a private chalet for tourism and business promotion to Minnesota-themed ads run on international TV to hundreds of event tickets.

Emails, handwritten notes and other documents obtained by The Associated Press under a public records law highlight the late scramble and the wariness by state officials about buying in.

''They want $1.5 million from the state. Get real,'' Minnesota tourism director John Edman wrote to colleagues the morning after the May 12 meeting with tournament representatives, other state agency leaders and at least one legislator. ''It is not in our interest. They want us more than we want them.''

Kevin McKinnon, deputy commissioner of the state economic development agency, agreed in a note to Edman, saying ''fact is the event is here whether we do anything or not and the benefit (albeit very small to the state) will happen.''

Both suggested smaller sponsorships, perhaps in the Hazeltine welcome center.

Despite that hesitance and the fact that no bill had even been introduced, records show the carve-outs for Ryder Cup expenses remained in play with the Legislature and Gov. Mark Dayton's office until the very end. Nothing concrete emerged.

Republican Rep. Joe Hoppe, who was at the table and whose district includes Hazeltine, said he should have begun pushing for funds sooner and through normal budgeting channels.

''It wasn't a tactical decision to get anything in at the last minute or hide it,'' Hoppe said. ''People would have looked at it as a no-brainer.''

Patrick Hunt, chairman of Hazeltine's Ryder Cup host committee, said organizers weren't in search of a traditional subsidy but were offering the state ways to leverage the international exposure the event assures. It will be aired for several days in at least 160 countries and attended by 250,000 people, most of whom will come from outside Minnesota.

Whether the state partners with organizers or not, Hunt said, ''The Ryder Cup is coming. There are no ifs, ands or buts.''

Even without explicit approval, lawmakers supportive of Ryder Cup spending say nothing would stop agencies from dipping into existing state funds. The Legislature might revisit the topic next year in a session that convenes six months before golfers descend on suburban Chaska.

''This is something we should not ignore,'' said Sen. David Tomassoni, a Democrat from Chisholm.

Added Rep. Pat Garofalo, R-Farmington, ''This is a once-every-25-years opportunity to market our state to the world.''

The Ryder Cup alternates every two years between U.S. and European courses and features the top golfers from two continents squaring off in a team match-play tournament.

When a Kentucky course hosted the event in 2008, that state's lawmakers allocated $1.55 million for security, parking and logistical expenses. Four years later in Illinois, the Medinah Country Club reimbursed the state police for off-duty officers hired to help out, said Sgt. Matt Boerwinkle.

Minnesota officials balked at providing up to 600 hours of trooper overtime free-of-charge. State Patrol Lt. Chris Edstrom informed organizers that barring a special appropriation the state would bill the PGA.

By not acting this year, Hunt said Minnesota could miss out on one of the 80 hospitality chalets. Only 10 remain, with a going rate starting at $250,000.

Lack of a formal partnership would also deprive agencies from including the official Ryder Cup logo on promotional materials. Emails show the PGA has already warned the state about improper use.

In one email, Edman said he can tout Minnesota without it. ''I really don't need the Ryder Cup logo to do that.''