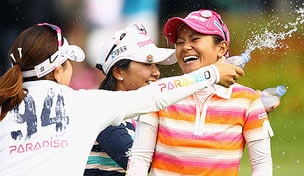 Getty Images
FARMINGDALE, NY - JUNE 20: Padraig Harrington of Ireland (R) plays a shot on the 11th hole while Tiger Woods (L) walks by during the continuation of the second round of the 109th U.S. Open on the Black Course at Bethpage State Park on June 20, 2009 in Farmingdale, New York. (Photo by Chris McGrath/Getty Images)  -

EVIAN-LES-BAINS, France – Ai Miyazato won the Evian Masters on Sunday, shooting a 2-under 70 to protect her two-shot lead and clinch her first title of the year.

Miyazato played with consistency throughout the tournament, dropping shots on just five of 72 holes and finishing with a 15-under total of 273. Stacy Lewis of the United States also shot a 70 to finish two shots back in second, with a trio of players another stroke behind.

“It feels amazing, this is my favorite tournament so I’m really happy that I could win this again,” Miyazato said. “Especially (because) right now, Japan’s having a tough time. So I am just really happy to bring some happiness to Japan.”

Miyazato had not won a title since the Safeway Classic last August, and the 26-year-old Japanese player now has seven LPGA titles overall. She won her first LPGA title at Evian in 2009, and added five more last year.

“There was so much happening at the beginning of the season, to be honest,” Miyazato said, referring to the natural disasters that hit Japan in March. “I always have Japan in my thoughts, it gives me motivation to play.”

Miyazato raised both arms in the air after she sank her winning putt, and several players ran on to the green to soak her with water.

She says she will donate a sum of her $487,500 prize money to the relief efforts dealing with the fallout of the earthquake and an ensuing tsunami that have devastated Japan.

“I haven’t decided yet, whether it will be all of the amount or some of it,” she said. “This year I was playing for Japan.”

“I want to win it as many times as possible,” Miyazato said. “I am looking forward to getting more opportunities.”

Lewis, the Kraft Nabisco winner, kept the pressure on and moved one shot behind Miyazato with a birdie on the 15th.

“We played in the same group yesterday, she played well without mistakes,” Miyazato said. “Even though she was in front of me I knew she would play solid today.”

Then, with a birdie chance to even the match on the next hole, Lewis three-putted for a bogey to again drop her two shots back of Miyazato.

Lewis had been self-critical after all of her previous three rounds, saying she lacked a cutting edge in the last few holes of the day.

That again proved to be the case, with Lewis’ putt for birdie on the 17th stopping agonizingly short. She could only make par on the 18th, a hole designed for attacking.

Kim had moved into contention at 10 under following a brilliant third round of 64, but the South Korean’s bid was undone by three straight bogeys on the front nine Sunday.

Miyazato started the day with three birdies and no bogeys on the front nine. On the fifth hole, Miyazato’s drive hit the lip of the green and rolled back, leaving her a 15-yard uphill putt for birdie. She got it close enough to comfortably make par, and then birdied the sixth and had another on the eighth to surge ahead at 16 under. At that point, it looked as if it would be a comfortable victory.

Miyazato then showed signs of nerves on the back nine.

A bogey on the 12th and a birdie from Hong, Miyazato’s playing partner on the day, trimmed her lead to one shot.

Miyazato bounced right back with a birdie on the next hole, while Hong bogeyed to drop three behind and give Miyazato some breathing space, which she needed after another bogey on the 14th.

“I was nervous this morning, but I had a really good feeling with my game and I really trusted myself,” Miyazato said. “Even when my lead was down to one I was never in a hurry, I expected that to happen.”

Stanford started her round poorly with a double-bogey on No. 1, although she made amends with three consecutive birdies halfway through the front nine.

Sweden’s Maria Hroth, tied for the first-round lead at 5 under, made only par to finish five shots back.

“I had a few bad holes today, so it was a bit disappointing,” said Hroth, who had four bogeys. “The course was still playing very wet and very soft, it’s been playing very similar over the four days.” Inbee Park of South Korea ended her four-year wait for an LPGA Tour title when she shot a 6-under 66 on Sunday to win the Evian Masters. 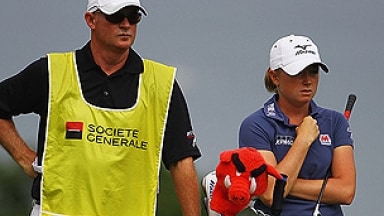 American Stacy Lewis made a birdie on the last hole to share the lead with South Korea's Inbee Park after the third round of the Evian Masters on Saturday. 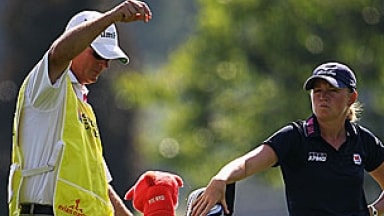 Stacy Lewis shot a 3-under 69 to lead Ilhee Lee by one stroke after the second round of the Evian Masters in Evian-les-Bains, France.