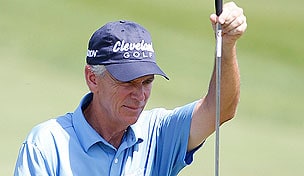 NAPLES, Fla. – Larry Mize played an almost-perfect round on what he called a perfect day for golf.

Mize shot a 10-under 62 in calm, sunny conditions Friday to take a two-stroke lead after the first round of the Champions Tour’s ACE Group Classic.

“I just think it was an ideal day to play golf,” said the 53-year-old Mize, the 2010 Montreal Championship winner for his lone title on the 50-and-over tour.

Tom Lehman, the player of the year last season, was second along with Kenny Perry and 2011 Senior British Open champion Russ Cochran. Mike Goodes, who won the qualifier Tuesday, was another stroke back at 65.

“It’s amazing,” Perry said. “You can shoot 64 and be two behind. Typical day on the Champions Tour.”

“It doesn’t surprise me when Larry Mize makes a putt,” said Goodes, who played with Mize. “If you ever watch that silky stroke of his, he’s got one of the prettiest strokes ever.”

“I could see 6, 7 under, but 10 under is pretty amazing,” defending champion Bernhard Langer said.

Langer, the winner last year at The Quarry, was at 66 along with Jay Haas and Michael Allen.

This April will be the 25th anniversary of Mize’s playoff chip-in to win the 1987 Masters. This is the 25th edition of a Champions Tour event in Naples. Mize’s 62 is lowest on the tour since Nick Price shot an 11-under 60 last year in the Toshiba Classic.

“I’ve just got to enjoy today and come out and keep firing the next two days because everybody’s going to be firing as well,” Mize said.

“Sixty-twos don’t come along very often, so it’s a pretty special day for me,” said Mize, who did not win that year at Riviera Country Club.

Perry was 8 under going into the 17th, which had been playing downwind and yielded six eagles and 36 birdies. But Perry put his tee shot in a bush and had to take an unplayable lie. He was just short of the green, but put his pitch shot 20 feet past the hole and made bogey.

“I may have tried to swing too hard on No. 17, may have tried to do something a little bit out of my element there that I probably shouldn’t have done,” Perry said. “I was feeling good. I made nine birdies, and just was rolling, just made four birdies in a row.”

Lehman rallied after bogeys on Nos. 11 and 12 with five straight birdies. He just missed a birdie putt on No. 18 to make it six in a row.

“The round had a little bit of a hiccup there in the middle,” Lehman said.

Cochran, playing the back nine first, birdied Nos. 8 and 9, his final two holes, to get to 8 under. He shared the first-round lead last year, and went on to tie for third. 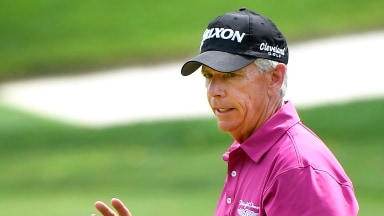 Larry Mize birdied half the holes and shot an 8-under 64 Thursday for a one-stroke lead after the opening round of the Senior Players Championship. 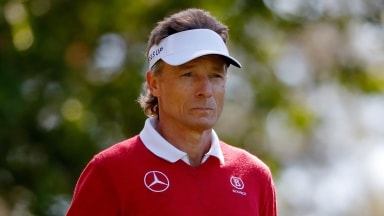 Fifty-somethings Bernhard Langer, Larry Mize and Davis Love III all made the Masters cut and will play the weekend at Augusta National. 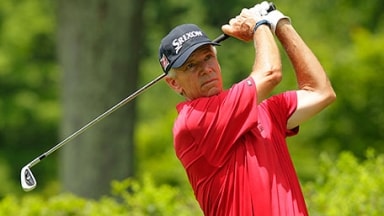 Larry Mize birdied the par-5 18th hole for a 5-under 67 and a two-stroke lead over Fred Couples and four others Friday after the first round of the Champions Tour's Boeing Classic.