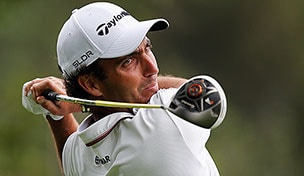 Getty Images
CHARLOTTE, NC - MAY 16: Rory McIlroy of Northern Ireland tees off on the third hole during round three at the Wells Fargo Championship at Quail Hollow Club on May 16, 2015 in Charlotte, North Carolina. (Photo by Jeff Gross/Getty Images)  -

JOHANNESBURG – Edoardo Molinari was in a four-way tie for the first-round lead at the European Tour's Joburg Open with his 7-under-par 64 on Thursday.

The Italian, chasing a spot in the British Open as well as his first title in four years, was joined by Scottish pair Alastair Forsyth and Craig Lee and South African Justin Walters.

A member of the 2010 European Ryder Cup team, Molinari opened with three straight birdies at Royal Johannesburg and Kensington and collected eight in all on the par-71 West Course.

"The front nine was probably as good as I've played in a long time," he said.

Lee had maybe the most impressive start with his 7-under 65 on the tougher par-72 East Course, with eight birdies and just one bogey on No. 17.

"It's really hard to figure out where you are in the field with two golf courses, and with the East being slightly tougher I feel like I'm in a good position," Lee said.

Forsyth and Walters both carded 64s on the West, with Forsyth not dropping a shot all day. They led by one shot.

Players play one round on the East and West courses before finishing on the East over the weekend.

The tournament is also a qualifying event for the British Open in July and offers places to the three highest-placed finishers in the top 10 not already exempt.

None of the top 10 on Thursday have qualified for the Open.

Johannesburg defending champion Richard Sterne opened with a 5-under 67 on the East, but couldn't fully capitalize on an eagle three on his first hole, as he sat in a tie for 13th. Sterne has qualified for the British Open, as has former Masters champion Charl Schwartzel, who managed a 69 on the East.

Molinari has battled through health problems since his 2010 Ryder Cup debut and hasn't won since that year, but looked solid with five birdies and a single dropped shot on his opening nine. He made another three birdies coming in.

Chasing the leading pack are eight players on 6 under, including South Africa's Hennie Otto, who tied for second in the season-opening South African Open in November.

South Korea's Jin Jeong, who won his maiden tour title at the Perth International last year, is also in contention after a 65.

The Joburg Open is the sixth tournament out of 10 on the early European Tour schedule to be played in South Africa. There will be a seventh next weekend with the Africa Open.