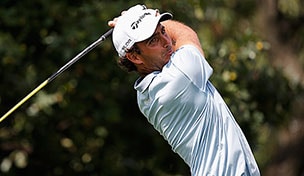 JOHANNESBURG – Edoardo Molinari and Craig Lee share the halfway lead at the Joburg Open on 11 under par, while David Horsey charged into contention with a 63 to sit a shot off the pace on Friday.

England's Horsey went 8 under through his second round with eight birdies and no dropped shots on the par-71 West Course at Royal Johannesburg and Kensington to be in contention for a first European Tour title in three years.

Ahead of him, Molinari and Lee held onto their overnight advantage. Molinari had a 4-under 68 on the longer, tougher East Course and Lee a 67 on the West after a run of four birdies on the front nine.

South African George Coetzee (68) is alongside Horsey a shot back.

Finland's Roope Kakko matched Horsey for best round of the day with his 8-under 64 on the East to move to 9 under after racing through the front nine with seven birdies. Kakko slowed on the back nine, and dropped shots at Nos. 10 and 16, but had done enough by then to be within striking distance of the top.

Charl Schwartzel made an inconsistent 70, with seven birdies and six bogeys, to sit in a tie for 55th on 4 under – flirting with the cut.

Players at the Joburg Open aren't only chasing the $280,000 winner's check. Three places in the British Open are available for the highest-placed finishers in the top 10 who have not already qualified.

The highest player in Johannesburg already with a place at the Open was Frenchman Gregory Bourdy in a tie for 12th, leaving a bunch of players to battle it out for the qualifying spots.

While Italy's Molinari and Scotland's Lee hold the edge ahead of the two final rounds on the East Course, Horsey's performance on Friday started with six birdies in his first nine and was capped by a 30-foot putt for his eighth birdie on No. 16 to put him in sight of the title, and also a place at his home major.

''It's (the British Open) at the back of my mind at the moment, but it's certainly a bonus to consider near the end of the week,'' Horsey said.

Molinari has looked like the player of 2010 – when he won both the Ryder Cup and his last tour title – over the opening two days in South Africa with his 64 and then a 68.

Lee is hanging in there to share the lead with Molinari. Kakko's impressive 64 put him in a seven-way tie for fifth, two shots off the leaders.