SAINT-QUENTIN-EN-YVELINES, France – For one flawless round Friday, James Morrison put aside the chronic stomach ailment and personal heartache he’s dealt with recently to shoot a 5-under 66 and take a one-stroke lead after the second round of the French Open.

The Englishman almost skipped the tournament after having to go to the hospital on Tuesday because of Crohn’s disease, a chronic inflammation of the digestive tract that he’s suffered from for the last decade.

“I had a flare-up at the start of the week,” Morrison said. “I wasn’t going to play up to Wednesday morning.”

It is far from the only difficulty the 26-year-old Morrison has had to overcome recently.

His wife Jessica was diagnosed with a cancerous cyst last year, and then suffered two miscarriages.

“A couple cancer scares and we had a couple miscarriages,” Morrison said. “And being told we’ll never have kids to falling pregnant and having two miscarriages.”

His golf game suffered because of it, and he missed his four previous cuts on the European Tour. But after starting with 10 straight pars on Friday, he birdied five of his last eight holes to surge past overnight leader Richard Green of Australia, who was one shot back after a 68.

Mark Foster of England fired a bogey-free 68 to climb to third, four shots behind Morrison’s halfway total of 10-under 132.

Morrison has just one bogey so far, and has yet to find one of the numerous water hazards on Le Golf National.

His wife’s improved health is one of the key reasons he can find his focus on the golf course again.

“Her health is my priority,” Morrison said. “She’s OK right now but it’s something that you have to keep monitoring every three months forever now.”

Alvaro Quiros of Spain (146), Peter Hanson of Sweden (147), American lefty Bubba Watson (148), Francesco Molinari of Italy (149) and Pablo Larrazabal of Spain (149) were among the players who failed to make the cut.

Defending champion Miguel Angel Jimenez of Spain (150) and Soren Hansen (152) also failed to finish above the cut line of 2-over 144.

Morrison parred his first 10 holes in the morning before making five birdies in seven holes to go four strokes clear of overnight leaders Green and Graeme Storm of England, neither of whom had yet started their second rounds.

In the afternoon, Green sank three consecutive birdies on his back nine to overtake Morrison, but a double bogey on the seventh hole cost him the lead.

Thorbjorn Olesen of Denmark was tied for fourth place with Richie Ramsay of Scotland and Matthew Nixon of England, five strokes back.

Martin Kaymer of Germany stayed in contention by shooting a 69 for a share of 14th place. The 2009 winner had six birdies but also dropped four shots.

Jimenez had a nightmarish round despite an eagle and a birdie as he made a quadruple bogey on No. 13 and seven bogeys. 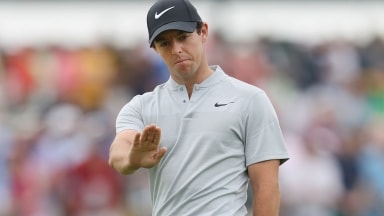 Rory: U.S. Open MC could be a good thing

Rory McIlroy says his U.S. Open missed cut might have been a blessing in disguise, because it gave him an opportunity to pinpoint problems. 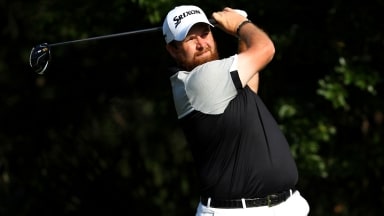 Ireland's Shane Lowry will defend his title at the WGC-Bridgestone Invitational instead of chasing a potential Ryder Cup berth at the Open de France. 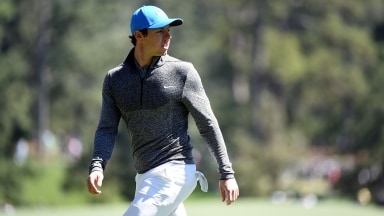 Rory McIlroy will play later this year in the European Tour’s French Open, not the WGC-Bridgestone Invitational, it was announced Monday.