Mueller ousts U.S. Am medalist Coletta in first round

Mueller, from Watkinsville, Georgia, survived a playoff Wednesday morning to advance to match play. He took a 3-up lead with a par won on the par-4 11th, lost the par-3 15th and 17th with bogeys and finished off the 19-year-old Coletta with a par for a halve on the par-4 18th.

''I really didn't have too many expectations,'' said Mueller, 4-0 in the Big Ten Match Play this year. ''I wanted to make match play. I feel like I'm a pretty good match player. I love it. Really anything can happen, and it's kind of cliche, but you really do have to take it one shot at a time and one hole at a time. That's what I tried to feed off of, and it seemed to work.''

Young lost to Gunn in the quarterfinals last year.

''Last year was kind of a frustrating day,'' Young said. ''It was a match I felt like I could have won. It was good for me to have another chance to beat him, and he's obviously a great player, so it was a lot of fun for me to have that opportunity.''

NCAA champion Bryson DeChambeau of SMU routed Robby Salomon of Monterey, California, 8 and 6. DeChambeau, from Clovis, California, won Nos. 3 and 5-10 and ended it with a birdie on the par-4 12th.

Arizona State senior Jon Rahm, the Spanish player who tops the world amateur ranking, beat Arizona sophomore George Cunningham of Tucson, Arizona, with a birdie on the 21st hole. Rahm won the first three holes, Cunningham tied it on the 13th and they halved the next seven.

Brad Nurski of St. Joseph, Missouri, had the most lopsided victory, beating New Zealand's Josh Munn, 8 and 7. Nurski won the final seven holes on the front nine and closed out Munn with a birdie on the 11th. The 37-year-old Nurski is a conductor and switchman for Burlington Northern Santa Fe Railway. He finished second in the 2014 U.S. Mid-Amateur. 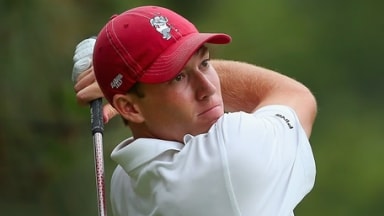 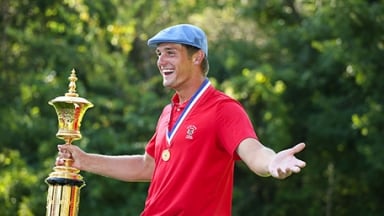 Bryson DeChambeau ripped off seven wins in a nine-hole span to storm past Derek Bard and win the U.S. Amateur in a rout. 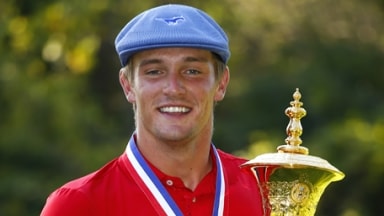 SMU senior Bryson DeChambeau won the U.S. Amateur on Sunday to become the fifth player to win the tournament and NCAA individual title in the same year.