Next month's British Open prize to rise to $1.43 million 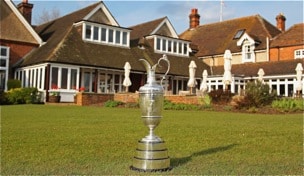 The tournament will be held at Sandwich, in southern England, from July 14-17.

Royal and Ancient Club chief executive Peter Dawson says his organization “strives to ensure that The Open provides the very best in all areas of the event.”

The last time the British Open was held at the Royal St. George’s course, back in 2003, American Ben Curtis earned $1.1 million at current exchange rates. Ten years before that, Greg Norman’s check was $160,000.