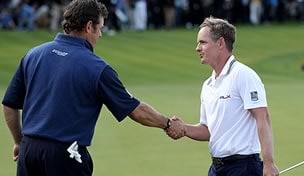 Getty Images
ASH, ENGLAND - MAY 29: Anthony Wall of England plays his second shot into the 18th green during the second round of The European Open at the London Golf Club on May 29, 2009 in Ash, England. (Photo by Warren Little/Getty Images)  -

VIRGINIA WATER, England – Luke Donald secured the world No. 1 ranking by winning the BMW PGA Championship on Sunday, beating Lee Westwood in a playoff in what was a duel for the top spot between the two Englishmen.

On the first playoff hole, Donald landed his approach onto the No. 18 green to within a few feet, while Westwood sent his shot into the adjacent water hazard to decide the tournament at Wentworth.

It is only the second stroke-play title in the past five years for Donald, who joins Westwood and Nick Faldo as the only Englishmen to hold the top spot since the rankings were introduced in 1986.

Donald will replace Westwood when the new rankings are released on Monday.

“Sounds pretty good, doesn’t it,” said Donald, last year’s runner-up. “It’s an amazing accomplishment. It’s something I will be very proud of when I look back. I will savor this moment, it’s very special. I think I will stay the same person, I hope I do. I’m looking forward to the challenge of staying No. 1. I know Lee and Martin (Kaymer) will be chasing me very hard.”

Having trailed co-leaders Matteo Manassero and Donald by two strokes entering the round, Westwood shot a 3-under 68 and Donald hit a 70 for both to total 6-under 278.

Simon Dyson of England (69) finished third at 280 after hitting a 69. Marcus Fraser of Australia (67), France’s Raphael Jacquelin (71) and Shane Lowry of Ireland (67) were a further stroke back.

Donald had missed two previous chances to become No. 1, losing to Ian Poulter in the World Match Play final last week in Spain and going down to Brandt Snedeker in a playoff at The Heritage in April.

But his consistency in finishing in the top 10 for the past nine tournaments – including winning the Accenture Match Play event in Arizona in February – ensured his first playoff victory on either the European or PGA Tour will give him the No. 1 ranking.

Donald said Westwood’s water-bound approach in the playoff was more down to poor fortune than execution.

“It wasn’t a bad shot, just had a litte bit too much spin on it. It was just unfortunate, you don’t like to see that,” Donald said. “Lee is a champion and has been a great No. 1 for European golf.”

A tournament of mostly unimpressive scoring – down to a redesign from Ernie Els that has made the West Course almost unplayable, or to fiendishly difficult pin placements, depending upon whom you believe – continued at the start of the final round.

After rounds of 72 and 72, Donald began the final day by going bogey-bogey, visibly blanching after duffing his chip at the par-3 No. 2 from just off the green.

Manassaero double-bogeyed No. 3 after needing two shots to reach the green from an adjacent bunker. Donald birdied the next hole to draw level with the Italian in front again.

Westwood, however, made four birdies in nine holes after a bogey on No. 3 to sit on top of the leaderboard.

Another birdie for Westwood on the difficult No. 15 green was made possible by one of the shots of the tournament. Having missed the fairway with his driver and receiving a free drop, he carved a 7-iron with draw that rolled within 4 feet of the hole, the putt taking him two strokes ahead of Donald.

That lead evaporated at No. 16.

Westwood three-putted after having dropped his club in his follow-through from the tee. Donald, in the next group, landed his approach within a foot of the hole – and the top two players in the world were level again.

Down the home straight, Donald and Westwood mixed the sub-standard with the sublime.

Donald’s birdie putt lipped out on No. 17 after a brilliant rescue shot from an approach that hit a tree. He landed his tee shot into the bunker at No. 18, not long after Westwood had sent his 5-wood into the gallery at the last.

Both players made par to head back to the No. 18 tee, but Westwood’s reign as No. 1 was to end on the first playoff hole.

“If you’re going to miss your chances, you’ll go into a playoff – and they are volatile, aren’t they?” Westwood said later.