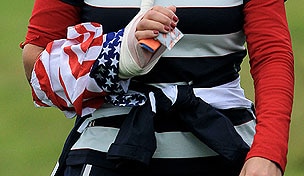 DUNSANY, Ireland – United States captain Rosie Jones had no regrets about her management of Cristie Kerr’s injury after watching her team miss out on retaining the Solheim Cup by a point.

Kerr broke down in tears during the warm-up ahead of Sunday’s singles when it became apparent that she would be unable to play any part in the final day because of tendinitis in her right arm.

That gave Karen Stupples of England a point by forfeit and Europe went on to win, 15-13. The U.S. needed 14 points to retain the cup.

“I checked with her every single match to make sure,” Jones said. “The last thing I did right before I submitted my pairings was to check on Cristie, because she was playing in some of the last matches, to make sure she was ready to go. She felt good.

“Unfortunately, overnight the inflammation was too much and we lost the opportunity for her to play today. You know, you never know when that’s going to happen.”

Jones picked Kerr in all four sessions on the opening two days, despite admitting that she had had concerns about her top-ranked player since Friday morning.

“She started anti-inflammatories on Friday night and felt better,” Jones said. “I checked her every day to see if she could go.

“The wrist is just fatigue and it’s too painful. She can’t pick up the club … We considered a change Friday morning but she was fine then.”

Kerr picked up 2 1/2 points during the first two days, but her withdrawal on Sunday gave Stupples her first Solheim Cup singles point.

“I’m devastated that I couldn’t play today,” Kerr said. “I tried my best but I couldn’t hold the golf club.”

Europe achieved its first Solheim Cup victory since 2003 thanks to a strong finish to the singles. The United States, which leads the series 8-4, will try to win back the trophy at Colorado Golf Club in Denver in 2013.

Cristie Kerr was upset when she was left off last year's Solheim Cup team, and she admits she feels like people have "written [her] off." Now, she's reignited with passion for the game and for winning.