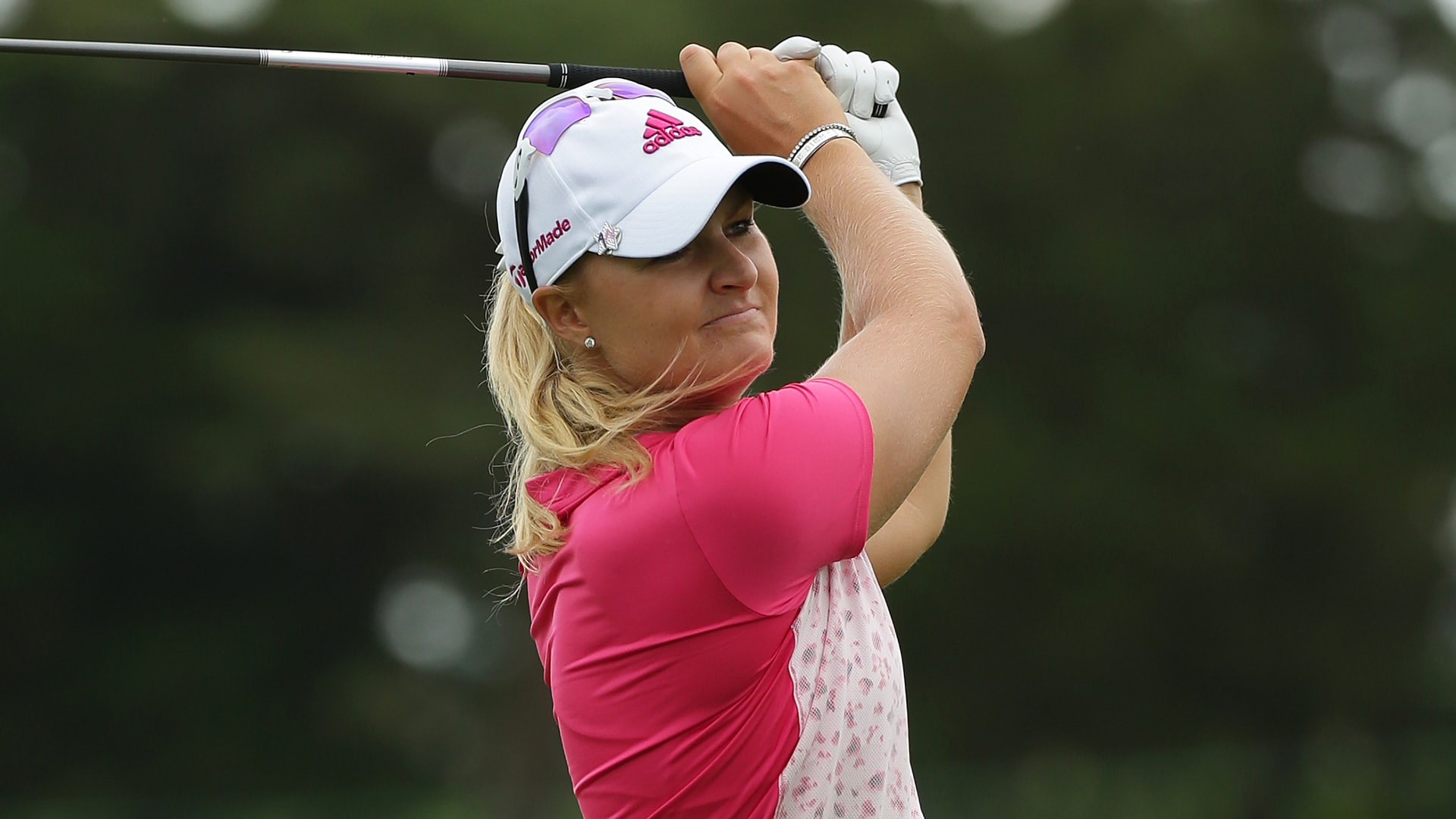 Nordqvist opened her ShopRite LPGA Classic title defense with a 7-under 64 on Friday for a share of the lead with Ai Miyazato and Paula Reto. Lewis, the tournament winner in 2012 and 2014, had a 66.

Nordqvist bogeyed Nos. 11 and 12, the second and third holes of her round, then birdied nine of the last 12 holes. The Swede twice made four straight birdies - on Nos. 16-1 and 6-9.

''I think it was just a little rust,'' said Nordqvist, playing alongside Lewis and Lizette Salas the first two rounds. ''It was early in the morning. I'm not a morning person. But 11 and 12, they weren't really bad shots, but they just ended up in places you really couldn't want to be. I just kept my head high and started giving myself better chances.''

Miyazato and Reto were paired together in the afternoon.

''First time playing with her in a tournament, actually, but she's a really nice girl and she hits it really long,'' Miyazato said. ''It was a good atmosphere. Just a good chemistry, I guess.''

Japan's Haru Nomura, a two-time winner this year, was a stroke back along with Casey Grice and Catriona Matthew.

''A little bit frustrating because I left some out there, but I think that's the best first round I've had all year,'' Lewis said. ''So, first round's kind of been my thing and to get off to a good start is a really good thing. ... Maybe a round like this will break the trend a little bit.''

Down to sixth in the world, the 31-year-old Lewis is winless in 49 starts since taking the North Texas LPGA Shootout in June 2014 for her 11th LPGA Tour victory. She tied for second three weeks ago in Alabama, her 10th runner-up finish during the drought and her 23rd overall.

Salas had a 67 in the strong group.

''We had a bunch of holes where we all made birdies,'' Lewis said. ''Anna, I think, is the only one that got off to a slow start, but then she just made everything the last 12 holes or so. She made nine birdies in 12 holes or something. It's cool and fun to watch. Especially on these greens, it's nice to see other people making putts because then you feel like you can make some, too.''

Miyazato had an eagle, six birdies and a bogey. The Japanese player won the last of her nine LPGA Tour titles in 2012. She won at the Bay Course in 2010.

Reto birdied four of her final five holes. The Spanish player is winless on the tour.

''I'm really excited,'' Reto said. ''I played good today, steady, especially with irons and putting, but not so much off the tee. So, I got away with a couple of the shots. I told myself, 'One shot at a time, don't focus and doubt yourself.' Everything paid off and I'm really happy.''

The KPMG Women's PGA Championship, the second major championship of the year, is next week at tree-lined Sahalee near Seattle. Straight driving also is important on the Bay Course.

''I think it's a ball-striker's course,'' Nordqvist said. ''Greens tend to get a little bumpy. It's poa, so you just have to give yourself a lot of chances. Iron play has been one of my strengths and today I hit them close, and that's how you're going to make birdies out here.''

After the early bobble, Nordqvist put on an iron clinic.

Fourth-ranked Brooke Henderson opened with a 69. The 18-year-old Canadian is coming off a third-place tie in Michigan, her ninth top-10 finish of the year. She won last year in Portland, Oregon.

Top-ranked Lydia Ko and streaking Ariya Jutanugarn are skipping the tournament to get ready for the KPMG Women's PGA. Jutanugarn has won three straight events, the last a five-stroke victory Sunday in Ann Arbor, Michigan, in the LPGA Volvik Championship.