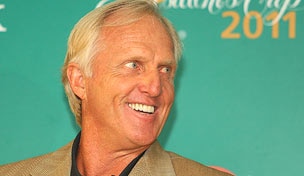 LA QUINTA, Calif. - Greg Norman hadn’t played the Bob Hope Classic since 1986, and he had no plans to return to the Palm Springs desert’s venerable tournament until Bill Clinton changed his mind.

“I got a phone call I could never say no to, and there’s no question about that,” the Australian veteran said Wednesday. “We had a very frank conversation about the opportunities and the format and how the tournament can be resurrected. … The Bob Hope was such an iconic event. We hate to see events like that disappear.”

After several slow years threatened the future of this famed pro-am, the tournament is back in full swing with a new name, a slicker format and an improved field.

The Humana Challenge might have lost Hope, but it gained Clinton - who’s at least from a town called Hope.

After gaining its first title sponsor in four years, the tournament dropped its fifth day of competition and eliminated one venue from its traditional four-course rotation. The field also features far fewer amateur playing partners to annoy the pros, and the purse grew to $5.6 million.

The changes are designed to attract bigger names to an event that’s been skipped by many players in recent years - even by Anthony Kim, who went to high school in the valley - in favor of a week off or lucrative paydays overseas.

So far, the Humana field is much healthier: Phil Mickelson will start his season here Thursday, as will world No. 8 Dustin Johnson and No. 11 Matt Kuchar.

“Pretty much everything about coming out here, I really enjoy,” said Kuchar, who usually prepares for most seasons with a few weeks in the desert before the two opening Hawaii tournaments. “This year I felt like the offseason was extra short, and I decided to start my year here instead of in Hawaii, and I’m real excited.”

The tournament also forged a new partnership with the Clinton Foundation, which returns a presidential feel to an event once played by Dwight Eisenhower and Gerald Ford, both close friends of Hope. Clinton will play with Norman on Saturday, and his foundation will spend the week promoting healthy lifestyles to the Coachella Valley fans.

The tournament’s revival is welcome news to those fans who had grown dissatisfied with the decline of an event that traditionally featured movie stars rubbing elbows and trading swing tips with the world’s best golfers.

“It’s going to bring more people out, and having President Clinton a part of this event is drawing way more attention than it’s ever had,” said Kim, who’s sleeping in his childhood bed this week because his parents still live in the area. “No disrespect to Bob Hope or anybody else, but I see this tournament getting better and better every year.”

After 52 years as a five-round event played over four courses, including the last eight years as the only remaining five-day event on the PGA Tour, the tournament dropped back to a four-round format this year. Players mostly hated the extra day of competition, citing the grind as just one reason many top stars stayed away.

The winner gets just over $1 million from the expanded purse. The pro-am also reduced its field of amateurs from over 380 to just 144, with two pros and two amateurs in every group, instead of forcing every pro to play with three different amateurs on each of the first four days.

“I think that what kept people from coming maybe in the past was the five days, was the 12 different amateurs,” said Kuchar, who claims to love the pro-am format in either incarnation. “It’s not for everybody, for sure. I think the new format is much more appealing to everybody.”

The tournament’s three courses are among the PGA Tour’s easiest tracks, and the tour record for birdies is often in trouble. Defending champion Jhonattan Vegas earned his first PGA Tour victory in his fifth career start last year, winning a playoff with Gary Woodland and 2010 champion Bill Haas. Johnson Wagner, who won the Sony Open in Hawaii last week, also is in the field.

The amateur field has been sharply reduced, but Clinton isn’t the only duffer who will draw a crowd. The field is expected to include Morgan Freeman, Don Cheadle, Julius Erving, Billy Crudup, Smokey Robinson and Hugh Rodham, Clinton’s brother-in-law.