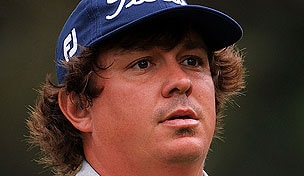 JASON'S TRAVELS: Jason Dufner has been traveling the world before anyone knew who he was.

The PGA champion first went to Australia for a Nationwide Tour event. He played a Tour de las Americas event in South America. He was the ''other American'' who received a sponsor's exemption to the Australian Masters in 2009 when record crowds watched Tiger Woods win at Kingston Heath.

''I've always wanted to go play different places in the world,'' Dufner said Tuesday at the HSBC Champions. ''Some of the guys I looked up were world players – Gary Player, Ernie Els, Vijay Singh, guys like that. I think it's important for the game of golf. And now that I'm a higher-ranked player, it would be selfish for me not to do it. The game needs us to play more.''

Dufner even is contemplating European Tour membership for next year, though it might be too much on his plate.

He already plays two events in the Middle East. He can count the four majors and four World Golf Championships. The problem might be finding two more events in continental Europe.

''I've been kicking around the idea,'' he said. ''It's just figuring out what events might fit and what might not.''

DIALED IN: Heading into the final stretch of the season, Rory McIlroy was still tinkering with his equipment after the switch to Nike. He feels as if he finally has it figured out, thanks to a new combination of a driver with a slightly larger head, and a ball is softer around the greens.

Of course, it helps that he is swinging better than he has all year.

''It's the highest ball speed I ever got - 184 mph ball speed, which is high,'' he said. ''This is the first year I comfortably going into the 180s in all speed, and this has upped it again. I feel comfortable with it. And the most comforting thing is I'm swinging the club well.''

UNLUCKY ALTERNATES: Joost Luiten was first alternate at the British Open, and he wasn't very happy when Peter Hanson played only five holes before he withdrew with a bad back. Hanson knew he couldn't finish the tournament. He felt he had to tee off so it would count as a start toward the minimum 15 required to remain a PGA Tour member.

Luiten found that out for himself last week at the BMW Masters. He had a shoulder injury and felt he couldn't play. Justin Walters of South Africa was the first alternate who desperately needed a start.

The problem was a European Tour policy that requires players to compete in two of the three events in the Final Series to be eligible for the season-ending World Tour Championship in Dubai. Luiten's best chance of getting to Dubai was to count the BMW Masters, take off two weeks to heal his shoulder, play in Turkey and then be eligible for Dubai. He is No. 14 on the money list.

Among the players he sought for advice? Hanson, of all people.

''In the locker room, he's asking me, 'Should I play or should I not?' We had a laugh about that,'' Hanson said.

Luiten hit a weak tee shot with his driver on the first hole and withdrew. He got credit for the start. Walters is likely out of the Race to Dubai.

In Hanson's case, his only other option was to take a minor medical exemption, which would have given him low priority for the 2013-14 season. He felt bad about his WD at the Open, but it worked out well. He managed to finish his next two events (Firestone, PGA Championship) to reach 15 starts, and he finished at No. 125 on the money list to keep his card for the next season.

''He was first alternate at the Open, and I don't blame him for being upset,'' Hanson said. ''But like I said, I wanted to keep my job. And my best chance to keep my job in America was to tee it up. In the end, you have to look after yourself.''

RYDER CUP: Padraig Harrington winced when asked if he would like to be a vice captain next year in Scotland at the Ryder Cup because it brings up the possibility the three-time major champion might not make the team.

''If I didn't make the team, I would be delighted to be a vice captain,'' Harrington said.

He said he has not spoken to European captain Paul McGinley, and McGinley hasn't said anything to him. It's a conversation he hopes doesn't take place.

''I'm in that situation that I hope he's not thinking like that,'' Harrington said.

ASIA-PACIFIC SPOILS: Augusta National and the Royal & Ancient Golf Club were behind the creation of the Asia-Pacific Amateur. The perks they offer are different.

The winner gets an invitation to the Masters, but only a spot in the final stage of qualifying for the British Open. With the changes to Open qualifying, that means Lee Chang-woo will be exempt into a tournament in Thailand where he will try to be among the top three finishers not already eligible.

''I want to see that maybe the winner of this Asian Amateur Championship can play directly over there as they can play at the Masters,'' said Kwang Soo Hur, president of the Asia Pacific Golf Confederation.

Perhaps that day is coming.

The Masters has the smallest field among majors – fewer than 100 players – and has room for an extra amateur. The Open is a 156-man field, with an alternate list. Plus, it was hard to predict the quality of the competition when this event began five years ago. The previous three winners all made the cut at Augusta National.

''It's become very, very evident from the champions that have been produced through this championship that they are of a world-class standard, and I think this is something that we and the R&A will continue to consider,'' R&A chairman Wilson Sibbett said last week. ''We haven't a plan as yet for direct entry, and so at the moment, it would still be through qualifying. But it may well be that in the future, that may change.

''But we do recognize that the standard is extremely high, and the evidence from last year at the Masters was a very clear indicator that in a world calibration, these golfers are competitive and make the cut.''

DIVOTS: The European Tour returns to South Korea next year, even though it lost Ballantine's as a title sponsor. The tournament will be played May 1-4 at Blackstone Golf Club in Icheon. The tour said it would announce a new title sponsor later. ... Gonzalo Fernandez-Castano is indebted to Soren Kjeldsen. The Spaniard forgot his wide-brim Cleveland visor last week, so he played without a hat. He won the BMW Masters, and for the trophy presentation, borrowed Kjeldsen's Cleveland visor so his primary sponsor could get its due in the victory photos.

FINAL WORD: ''When I was an amateur, it didn't mean much about me going up and down score wise. And now it's pretty much $1,000 on the line. I've just got to learn to not think about that and just enjoy myself.'' - Lydia Ko on joining the LPGA Tour next year.