Notes: Muirfield's No. 14 could yield a lot of birdies 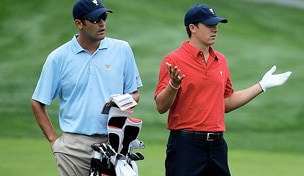 DUBLIN, Ohio – The signature 14th at Muirfield Village can be a birdie hole for Tiger Woods – and maybe even a once-a-month hacker.

It's all about the approach, and that will lead to a lot of strategy at this week's Presidents Cup.

Off the tee, it's a relatively easy long-to-middle iron to a generous fairway, the ball coming up just short of a pleasant brook that bisects the hole and then snakes along the right side of the green.

From there, it's a lofted iron to the kidney-shaped green, bounded by three menacing sand traps on the left, with an abrupt slope to the creek on the right.

To add yet another element of suspense to this week's Presidents Cup, the PGA Tour, which sets up the course for the biennial team competition, toyed with the idea of shortening the par-4, 325-yard 14th so that long hitters could bomb away.

From the looks of it, few will take the bait.

Phil Mickelson - known for never shying away from a risky shot – probably won't even pull out driver. (Then again, with Mickelson, you never know for sure.)

''No. 14 will be up to each player,'' he said Wednesday on the eve of the start of the four-day event. ''As a player who likes to go for it, even I have a hard time understanding the advantage of going for it. Very simply put, there's water right, bunkers left with a green that's so severely pitched you can't stop it on the green.''

U.S. captain Fred Couples sounded as if he would discourage any of his players from going for it.

''On the 14th I watched Hunter (Mahan), Webb (Simpson), (Bill) Haas and (Brandt) Snedeker play the hole,'' Couples said. ''They all tried to drive the green. Three of them could actually reach the front part - it depends on where the pin is, but it's (still) a very difficult shot. Most players can probably get it up and down in front of the green but there isn't much room.''

The International team will decided as matches progress.

''It depends on the day,'' assistant captain Tony Johnstone said. ''I think some of the guys will go. Some of the guys feel that it's never the right option, that they would rather just knock it short and chip it on and they'll make more 3s from there. It's going to depend on the day, how the matches are going, how the guys are feeling, where the wind's blowing. But these guys are all world-class players, so it's whatever they desire to do.''

Keegan Bradley, who will be paired with Mickelson in the better-ball matches on Thursday, said the distance makes it particularly debatable to go for it off the tee.

''It's very difficult on that hole if you go for it and don't hit the green,'' he said. ''You're going to see a lot of guys still laying up because it's so brutal. But it's definitely right there.''

THREE'S A CHARM:The legendary year of Jordan Spieth added yet another chapter on Thursday.

The 20-year-old, who didn't have a PGA Tour card a year ago but won one time and played his way onto the U.S. Presidents Cup team, aced the signature 12th at Muirfield Village during a practice round.

''I got good video of him getting the ball out of the hole if you want to see it,'' U.S. assistant captain Davis Love III said.

He drained a 7-iron from 176 yards for his third hole in one – and second this year after jarring a shot at Puerto Rico.

Spieth was playing with Woods, Matt Kuchar and Steve Stricker.

''Tiger had already hit and he hit an 8-iron and it looked like he went after it, so I went ahead and hit kind of a smooth 7,'' the Texan said. ''It started at the flag and never really left it. I had flown the green a couple days before and I thought it was perfect. It took a little while to trickle and I thought it was going to be about a foot short. All of a sudden it dropped.''

Spieth swapped high fives with everybody in his group, including the caddies and officials. The crowd behind the green roared.

''It was really cool,'' he said. ''A cool environment that we had so many people around.''

DO AS I DID: K.J. Choi has won 17 times around the world. That includes the 2007 Memorial Tournament – held on the same Muirfield Village layout that is hosting the Presidents Cup this week.

He did not make the International side, but still is working in an official capacity this week. He's handling analysis for the television feed back to his native South Korea and is acting in an advisory role to the 2015 Presidents Cup, which will be held at the Jack Nicklaus Golf Club Korea in Incheon, South Korea.

It figures that he ought to provide some perceptive comments for both sides because of his success at Muirfield Village.

Asked if he thought the International side would win, he laughed and said, ''I wish!''

THAT'S MR. COUPLES, TO YOU: Couples, the U.S. captain, said he was approached by a younger man during a practice round on Tuesday.

''I met (Jordan Spieth's) father, who is probably eight years younger than I am, which is really weird,'' Couples said to loud laughter. ''I wasn't expecting that, but he came up and said, 'I'm Jordan's father.' I looked and thought he was 30 years old.''

Asked if Mr. Spieth addressed him as Mr. Couples, he cracked, ''No, he didn't, actually, but I told him to from now on.''

CHANGE IN SCHEDULE: International captain Nick Price believes that the way teams are chosen and other factors favor the United States. Maybe that's why the Americans are 7-1-1 in Presidents Cup play.

One area where Price was able to get the rules changed was the schedule. Play on Thursday will get under way with four-ball, or as it is commonly known, better-ball competition.

Traditionally, the first day was devoted to foursomes or alternate-shot play.

In four-ball, the low score for each pairing counts within the group. For example, if Ernie Els has a birdie at the fifth hole while paired with Brendon De Jonge in their match with Stricker and Spieth, and the Americans each par it, the Internationals win the hole.

''When Ernie and I went to see (PGA Tour Commissioner Tim Finchem) last year, just to talk about it, that was one of the concessions that he made,'' Price said. ''Both Ernie and I felt it was very important just to change it from the hardest format (foursomes) to the better-ball. That was a positive move for us.''

The International side has seven first-time participants in the Presidents Cup. Since foursomes is a format that none of those rookies has played before in international competition, Price believed it was advantageous to push that new experience back a day.

OTHER KEY HOLES: While many might be watching to see if someone goes for the green at the par-4 14th off the tee, there are several other decisions that will need to be made by players.

Snedeker takes us on a quick tour of the course and the choices made during the better-ball competition.

''Obviously, I think the par-5 fifth will be an important one on aggressive, you want to be there. If you're both in the fairway, who's going to go and who's going to lay up?'' he said. ''(The par-5) No. 11 will be a decision off the tee. If you want to be aggressive and hit driver and try to get down there and knock it on in two or lay back and play it as a three-shot hole. It depends on what your partner does, how you play that hole. And then 14 will be the only other one I could see being an issue.''

DIVOTS: Jay Haas Jr. is caddying for his brother, Bill Haas. Angel Cabrera's bag will be carried by his son, Angel Cabrera Jr. ... NBC will provide more than 890 live hours of coverage of the Presidents Cup. The competition will be on Golf Channel from 1 to 8 p.m. EDT on Friday and Saturday, then carried on NBC from 8 a.m. to 6 p.m. on Saturday and noon to 6 p.m. on Sunday. ... It may be the International team, but several players live at least part of the year in the States: Jason Day (nearby Westerville, Ohio), Brendon de Jonge (Charlotte, N.C.), Graham DeLaet (Boise, Idaho), Ernie Els (West Palm Beach, Fla.) and Marc Leishman (Virginia Beach, Va.), in addition to team captain Nick Price (Hobe Sound, Fla.) and assistants Mark McNulty (Orlando, Fla.) and Shigeki Maruyama (Los Angeles). ... The two sides had similar success (or lack of it) at the 2013 Memorial Tournament, held in June at Muirfield Village. Each team had two players miss the cut, the Americans had a 2-1 edge in top-10 finishes and the Internationals had a 6-4 advantage in those finishing in the top 50. However, the trump card is Matt Kuchar of the U.S. won the tournament.