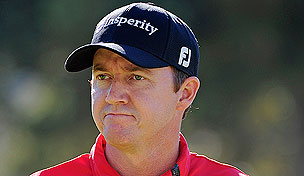 Getty Images
Tiger Woods of the United States hits a shot from a bunker on the practice range ahead of the 144th Open Championship at The Old Course on July 15, 2015 in St Andrews, Scotland. (Photo by Ian Walton/R&A/R&A via Getty Images)  -

MARANA, Ariz. – Jimmy Walker has been at the front of the pack all season on the PGA Tour. He got a jump on the field in the Match Play Championship, too.

The Texan was the first player to reach the second round Wednesday at Dove Mountain, finishing off South Africa's Branden Grace 5 and 4 before the last dozen matches even started.

''You want to get the first one out of the way and move on to the next round,'' Walker said. ''You just want to keep doing that. It's nice to get a win early. ... I've been playing a lot of golf and it will be nice to kind of relax a little bit this afternoon.''

Walker won at Pebble Beach two weeks ago for his third victory in nine starts this season. He also won the season-opening event at CordeValle in October and at Waialae in January. Before this season, he was winless in 187 PGA Tour starts.

''It's just validation for me, a lot of years being out here and working hard,'' Walker said. ''And to see it all kind of pay off, that's what I've been waiting for.''

Walker will face Rickie Fowler in the second round. Fowler beat Ian Poulter 2 and 1, playing directly ahead of Walker in the first match of the day.

''Jimmy Walker is hands down the best player in the world right now,'' Fowler said. ''It's going to be a tough match. I know he's a great ball-striker, he's been making a lot of putts and has a lot of confidence right now.''

Walker is playing his first match-play event since the 2000 U.S. Amateur Public Links – the summer between his junior and senior seasons at Baylor.

''I feel like my strengths are not giving holes away,'' Kuchar said. ''This is a unique golf course and it's real easy to get on the wrong side of things here, real easy to miss a green and just put it in a place where you can't get it up-and-down.

''So, I feel like I know the course pretty well. And I strategically feel like I can work my way around and not give away too many holes.''

He did give away the par-4 14th when he forgot to move back his coin on the green after moving the marker out of Wiesberger's line.

''I kind of just fell in love with watching his ball roll out and getting the line,'' Kuchar said. ''And then I think the situation took over that here I was with a 16-footer to win the match and felt really good about the line, and I completely forget to move the mark back. ...

''So made the putt, thought that was the end of the match, shook hands. And there were a couple of questions. I think Bernd asked my caddie, Lance (Bennett), had I remembered to move the mark back. And it came to me and I said, 'Son of a gun, I did not move the mark back.'''

Instead, of a 5-and-4 victory, Kuchar needed two more holes to finish off Wiesberger.

Kuchar will face Ryan Moore in the second round. Moore beat Joost Luiten 1 up.

MEDAL COUNT: Fifteen of the 27 U.S. players advanced to the second round, with the Americans going 10-6 against European opponents.

Only 10 of the 25 European players reached the second round.

Five of the six South Africans – Ernie Els, Charl Schwartzel, Louis Oosthuizen, George Coetzee and Richard Sterne – and all three Swedes – Henrik Stenson, Peter Hanson and Jonas Blixt – advanced. Justin Rose was the only one of the five English players to win, and Sergio Garcia was the lone Spaniard in the four-player contingent to advance.

WEATHER REPORT: A year after snow covered the cactus-lined course, play opened in partly cloudy conditions with a high around 80 degrees.

On Thursday and Friday, the forecast highs are around 75. It is expected to be a little warmer over the weekend, with forecast highs of 78 on Saturday and 79 on Sunday.

Last year, first-round play was suspended when rain gave way to snow from a storm that dumped close to 2 inches and dropped the temperature to 33 degrees. In 2011, the championship match was delayed by snow.