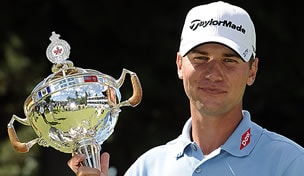 VANCOUVER, British Columbia – Sean O’Hair was too happy to end a miserable slump with a win at the Canadian Open to feel bad that it came at the expense of Kris Blanks.

O’Hair tapped in for bogey on the first playoff hole Sunday, and then watched Blanks lip out his bogey putt from just over 5 feet to earn the victory.

“I m sorry he missed the putt, but the fact I won knowing he missed it was just overwhelming,” the 29-year-old O’Hair said. “It just was overwhelming.”

That could also describe O’Hair’s slump heading into this week. Coming off a frustratingly close missed cut at the British Open, and in the midst of his worst season on the PGA Tour, O’Hair “played horrific” in Wednesday’s Pro-Am on the eve of the $5.2-million Canadian Open.

“Wednesday night was my worst point of the whole year,” O’Hair said. “I was lost on Wednesday. To be sitting here, I just really appreciate this win.”

O’Hair started three shots off the lead before shooting 68 to get into a playoff with Blanks (70) at 4-under 276. It was the second-highest winning total on the PGA Tour this season, and the first non-major without a bogey-free round since 2008.

Only eight players finished under par on the tree-lined Shaugnessy Golf and Country Club, so it was perhaps fitting it was won with a bogey. After a tough week, O’Hair didn’t mind seeing Blanks miss, but felt his pain.

“He and I were kind of in a similar situation. We haven’t been playing well,” said O’Hair, whose $936,000 win was almost triple his 2011 earnings, and vaulted him 104 places in the FedEx Cup playoff standings to 43rd. “You root for guys like Kris. I was rooting for (John) Daly, as well.”

Only one could win, but Blanks, Daly, and a few others hoped their performances at a tournament that played as hard as any this year, might help turn around their seasons that were every bit as miserable as the one O’Hair has been playing.

It just might take Blanks a while to get over the disappointment first.

Playing the 472-yard, par-4 18th again, O’Hair and Blanks both drove into the thick rough that many players compared unfavorably to the U.S. Open.

O’Hair’s shot came up short, but in the fairway, while Blanks ended up in a greenside bunker. He’d gotten up and down from the same spot on his final hole to join the playoff, but couldn’t keep it on the green the second time. After O’Hair two-putted from 21 feet, Blanks chipped past the hole, and the ball lipped out.

“I’m still a little (ticked),” Blanks said despite doubling his season winnings with $561,600, and jumping from 116 to 54th in the FedEx Cup. “The more I think about it, the more I’ll probably get upset at the shots I gave away.”

So will Argentina’s Andres Romero, who was 4 over through nine before making five birdies in his next seven to tie for the lead. But he missed a 22-foot par putt on No. 18, finishing with an even-par 70 and alone in third at 277.

Eventually, though, they will see more of the positives in their play.

“Oh sure, it definitely changes things,” Blanks said after matching his career-best finish. “Definitely makes the whole rest of the year a lot easier.”

The same goes for John Daly, who shot 72 to finish in a four-way tie for ninth at 280 – his first top-10 in six years – with Masters champion Charl Schwartzel, amateur sensation Patrick Cantley, and Spencer Levin, who all closed with 69s. Despite his over-par finish, Daly also felt good about his game.

Woody Austin, who shot 68 to tie for sixth, and Ernie Els, whose 66 was the best of the final round and moved him into a tie for 17th – his best result in more than four months – also hoped their strong finishes will serve as a springboard.

Few will benefit more than Canadian Adam Hadwin, a local playing on a sponsor’s exemption who bounced back from a miserable start to finish with a 72 and tied with Australian Geoff Ogilvy (70) for fourth at 2 under. Hadwin, in his second year on the third-tier Canadian Tour, failed to end a 57-year Canadian drought at the national Open, but earned another PGA Tour start next week.

“I felt like I was playing for my country out there,” Hadwin said. “I’ll catch a flight (Monday). I’ve got celebrating to do tonight.”

NOTES: Els moved to 131 in the FedEx Cup standings, while Donald moved up one spot to fifth after closing with a 67 to also finish 2 over. … Third-round leader Bo Van Pelt was still atop the leaderboard at 5 under at the turn, but played the next five holes at 4 over to finish in a tie for sixth with Scott Piercy (69) and Austin.