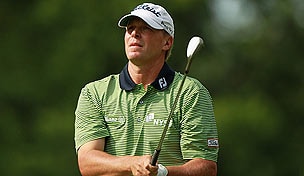 DUBLIN, Ohio – Steve Stricker had a hole-in-one on his 17th hole Friday in the Memorial to break out of a big pack and build a three-shot lead going into the weekend.

Stricker hit a 6-iron from 188 yards on the eighth hole for the second ace of his career. The other one came in the Phoenix Open in 1997 and earned him a car. All this gave him was a three-shot lead, which could eventually be even more valuable.

“It’s a shock when you see that go in, obviously, but in a good way,” Stricker said. “A great way to finish the round.”

Rory McIlroy (72), Ricky Barnes (70), Jonathan Byrd (67) and the resurgent Rod Pampling of Australia - who lost his PGA Tour card last year and had a bogey-free 66 - were in a group tied for second.

McIlroy already has made 13 birdies over two rounds, proof enough that he’s swinging well and making his share of putts. He also has five bogeys and a sloppy double bogey Friday on the 14th hole, when he pulled his tee shot into the tiny stream left of the fairway and nearly went into the water on his next shot.

“I felt as if I played good enough to shoot something in the 60s, but I just made too many mistakes out there,” McIlroy said.

McIlroy wasn’t alone in the good and bad of Muirfield Village.

Rickie Fowler, the runner-up at the Memorial last year, has only 12 pars in 36 holes. He was at 3-under 141, six shots behind but still very much in the hunt at the halfway points.

“The conditions are scoreable, but bogeys can creep up on you quickly,” Fowler said. “You can make some birdies, but if there’s a tough pin and you don’t hit the right shot, you’ll make bogeys. It’s a fine line.”

Ryder Cup captain Davis Love III was a great illustration of that. He had six birdies and an eagle and shot 73. Love also hit two into the water on the par-5 11th to make a triple bogey, then took a double bogey on the 17th along with four other bogeys.

Luke Donald, in his debut as the No. 1 player in the world, had another strong rally by finishing with back-to-back birdies for a 69 that left him at 5-under 139, still very much in the hunt. Donald has not finished out of the top 10 in nine straight tournaments.

“Some careless mistakes out there,” Donald said.

Stricker made his share, too, such as back-to-back bogeys from the bunker as he was finishing his front nine. But he played the final five holes in 5 under, highlighted by his second career hole-in-one.

He thrust his arms in the air when he realized it had dropped into the cup, but that’s about as excited as he gets about an ace. Some players keep the golf balls from the ace. Stricker teed it up on the ninth, made birdie, that gave the ball to the official keeping score without informing him where that ball had been lately.

His other ace came in the 1997 Phoenix Open on the 16th hole, the biggest party scene on tour. That was the hole - during the same year, no less -  when Tiger Woods made an ace and was showered with beer cans and plastic cups in one of the most raucous celebrations ever seen in this royal and ancient game. The replay has been shown countless times.

“You didn’t see mine that year? No?” Stricker said with a grin.

His came in the final round, and there’s a reason hardly anyone remembered. For one reason, not many saw it.

“That day, I had teed off the back nine first,” he said. “So there wasn’t a lot of people there.”

The good news for Stricker is the Phoenix Open awarded a car for a hole-in-one on the 16th, but only in the final round. So that’s one thing he got that Woods didn’t - just not for long.

“I used it for a little while, and then traded it in for a minivan,” said Stricker, whose first daughter was born a year later.

With so many wild scorecards, leave it to Phil Mickelson to have a conservative one. That’s not necessarily a good thing this week. Mickelson has made only five birdies against three bogeys through 36 holes, leaving seven shots behind.

“I need something good tomorrow,” Mickelson said. “I had a chance to shoot something in the 60s and move up the leaderboard and didn’t capitalize on a lot of opportunities.”

McIlroy pulled his opening tee shot and made bogey, but two other bogeys on the front came from the middle of the fairway, with a wedge in his hand for one shot and a 9-iron for another.

But he also looked like he’ll be a factor on the weekend with consecutive birdies, including a shot that he thought was headed to the back of the 13th green, only for it to settle 6 feet below the hole.

“I’m happy enough,” McIlroy said. “I’m thereabouts going into the weekend. There’s still a lot of golf left to play. I know that and everyone else knows that. I just need to limit those mistakes. If I can keep the silly bogeys off the card, I think I’ll be all right.”