SAVANNAH, Ga. – Mark O’Meara got the help he needed to win for the first time on the Champions Tour.

O’Meara and Nick Price teamed to beat Joey Sindelar and John Cook on the second hole of a playoff Sunday in the better-ball Liberty Mutual Legends of Golf.

“It’s very special, obviously,” O’Meara said. “I’ve been practicing hard and I’ve finished second a number of times. Having Nick as a partner out there helped a lot. To be honest, I was relaxed out there.”

O’Meara, the 1998 Masters and British Open winner, won for the first time since the PGA European Tour’s 2004 Dubai Desert Classic

“I felt like the timing was right, because we’re both playing pretty well,” said Price, who rolled in a 40-foot putt for eagle on No. 7. “I’m really happy for Mark and I’m happy because it’s been over a year since I’ve won.”

It looked as if this one might slip away, too, until Cook missed a 4-foot putt that would have won it on the final hole of regulation.

“We dodged a bullet there,” Price said. “I feel bad for John, too, because he was probably playing the best of all of us today.”

Playing in rain and heavy wind, both teams bogeyed the first playoff hole and returned to play the 457-yard 18th again, where Price won it with a 7-foot par putt.

“It was probably playing 500 yards today,” Price said. “It was at least 20 yards of wind on each shot, and it was two clubs. And it’s just so hard to keep the ball on that green.”

Cook and Sindelar (61) and O’Meara and Price (62) finished at 28-under 188 in the 54-hole event at The Club at Savannah Harbor, an island layout in the Savannah River.

Andy Bean and Lu Chien-soon (64) were a stroke back, and Bernhard Langer-Tom Lehman (63) and Fred Couples-Jay Haas (64) tied for fourth at 23 under.

Ken Green, making his first Champions Tour start since having his lower right leg amputated after an auto accident in June that killed his brother and girlfriend, teamed with Mike Reid tied for 26th at 12 under. They had a 71 on Sunday.

NOTES: O’Meara’s winless streak included 181 events on the PGA Tour and 57 on the Champions Tour. … Couples remained in the lead in the season-long Schwab Cup race with 1,015 points. Langer is second with 818, followed by Price with 461. … The team of Tom Watson and Andy North, who were playing together in this event even before it was for official money, made bogey at No. 6, ending at 257 holes their string of never going over par. 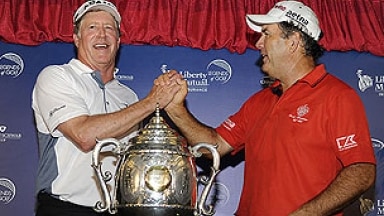 Michael Allen, with a little help from David Frost, has gone from practically unknown on the Champions Tour to practically unbeatable.

Brad Bryant and Tom Purtzer teamed up for a 12-under 60 to take the first round lead at the Liberty Mutual Legends of Golf championship Friday.

Ken Green learned over the weekend that he can still play golf. He just isnt sure how soon he wants to do it again.