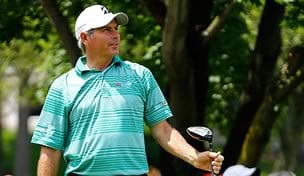 Getty Images
SAN ANTONIO, TX- MAY 13: J.B. Holmes on the 1st tee during the first round of the Valero Texas Open at the TPC San Antonio on May 13, 2010 in San Antonio, Texas. (Photo by Marc Feldman/Getty Images)  -

PITTSBURGH – Fred Couples roared through his first 11 holes in the second round of the Senior Players Championship on Friday, ripping off seven birdies at water-logged Fox Chapel to take the lead.

Then the weather managed to do what the defenseless course could not, stopping the Hall of Famer with a sudden downpour that suspended play for the day with most of the field still on the course.

The stoppage came just after Couples hit his tee shot on the par-3 third. The sky cleared in about an hour, but with fairways and bunkers resembling ponds and the threat of more storms looming, officials decided to send players home rather than wait out a lengthy delay to squeeze in a few more holes.

Couples understood the decision but allowed he was in the middle of something special when play was stopped.

Instead Couples was left to mull the 60-foot birdie putt that awaits when he and the 65 other players whose rounds were interrupted return to the course at 8 a.m. Saturday.

''I was hitting the ball well,'' Couples said. ''But you can look at the bright side tomorrow and hope to get it going again.''

First-round leader John Huston was two shots back at 9 under after eagling from the rough on the par-4 15th hole just before the horn sounded. It was Huston's second eagle in as many days on a par 4. He eagled No. 7 on Thursday when he drove the green and made a 25-footer.

This one was a bit more unexpected after Huston pushed his tee shot to the right and it sailed into thick rough that bore more than a passing resemblance to soggy cabbage. His sand wedge from 100 yards caught the ball clean and it dropped into the hole on the fly, no roll required.

''It was pretty shocking because it flew in the hole and stayed there,'' Huston said.

Couples stressed he won't be getting ahead of himself as he searches for his second win at the Senior Players, one of the Champions Tour's five majors. He led at the halfway point on the same course last year, shooting a second-round 63 only to slip on the weekend and finish fourth behind winner Joe Daley.

With the forecast calling for more rain over the weekend, Couples knows the rolling course a few miles north of downtown Pittsburgh won't be able to put up much of a fight.

It certainly didn't Friday, thanks to a steady stream of showers that have turned what is supposed to be one of the better tests on the tour into target practice. Officials allowed players to lift, clean and place their golf balls and, with the greens welcoming shots of all shapes, low scores were plentiful.

More than half the field was even par or better for the day when the thunderstorm arrived.

Though the conditions favored longer hitters such as Couples and Huston, the accommodating greens allowed short-hitting Jeff Hart to rise into contention. The 53-year-old shot a season-best 5-under 65 and was the leader in the clubhouse at 7 under.

Not bad for a player who was hitting fairway woods and long irons onto some of the lengthier par 4s. He hit a 3-wood to 5 feet on the 475-yard eighth hole and made the putt, then knocked a 4-iron within a foot on the 422-yard 16th.

Hart hit 13 of 14 fairways and 15 of 18 greens. The 53-year-old grinder has never finished in the top 10 in a Champions Tour event but is coming off a solid 15th-place finish at the Encompass Championship last week. He pointed to a change in mindset for the uptick in his play.

''I'm finally learning to try less and less,'' he said. ''I think that's the key for me. I think we're all conditioned to try harder and in all sports you're told to 'get in there, try harder' and certainly golf is no different. But I'm just kind of letting it go right now and that's the key.''

Duffy Waldorf was also 7 under with four holes remaining in his second round.

Fred Funk, Mike Goodes and Michael Allen were 6 under, with points leader David Frost and Russ Cochran one shot back at 5 under.

Colin Montgomerie, making his Champions Tour debut, moved into a tie for 10th with Corey Pavin and Mark Calcavecchia at 4 under after rolling in birdies on his first five holes.