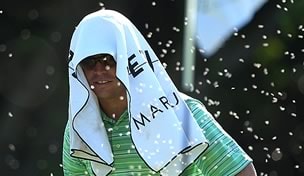 EAST LONDON, South Africa – Defending champion Louis Oosthuizen shot an 11-under 62 Friday to take a two-stroke lead after the second round of the Africa Open.

The South African had nine birdies and an eagle on the East London Golf Club course, which saw an infestation of flying ants Friday, to lead Retief Goosen(68) and three others.

Oosthuizen missed equaling Richard Sterne’s course record by a shot, moving to 131 overall at the European Tour’s season-opening event. The former British Open champion capped his round when he drove the green and sank a 50-foot putt for eagle on the par-4 sixth.