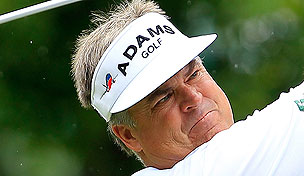 SAN ANTONIO – Kenny Perry birdied five of the first six holes and finished with a 7-under 65 to take the first-round lead Friday in the Champions Tour's AT&T Championship.

The Charles Schwab Cup leader birdied the first three holes, dropped a stroke on the par-3 fourth, then birdied the next two holes. He added birdies on Nos. 12, 14 and 15.

Perry has played the past few weeks with a higher lofted putter, but he has switched back to a less-lofted model he used when he won the Senior Players Championship and U.S. Senior Open in consecutive tour starts this summer. He had only 12 putts in a front-nine 32.

''I went back to the putter I used to win two senior majors with and immediately started holing putts,'' Perry said. ''Seems like the last two weeks I've been having a root canal trying to make birdie. It was so much easier today. I putted beautifully.''

The top 30 on the money list Sunday will advance to the season-ending Charles Schwab Cup Championship next week at TPC Harding Park in San Francisco. Perry entered the regular-season finale 494 points ahead of second-place Bernhard Langer in the race for a $1 million annuity.

He took the lead on TPC San Antonio's AT&T Canyons Course with a two-putt birdie after reaching the par-5 15th in two with a 3-wood. He parred out to remain one ahead.

Tom Pernice Jr. was a stroke back after a 66. He won the 3M Championship in August in Minnesota.

''My swing is continuing to improve, and this might have been the best I've driven the ball this year,'' Pernice said after missing just one fairway on the back nine. ''It set me up for a lot of good opportunities.''

''''He's swinging really good,'' Langer said about Forsbrand, who was an assistant when Langer captained the winning 2004 European Ryder Cup team. ''He's certainly hitting the ball as good as anyone on this tour right now.''

Fred Couples, the 2011 winner who missed the event last year because of a back injury, had a quadruple-bogey 8 on the first hole en route to a 75.

David Frost, a playoff winner over Langer last year in the event, shot 77.