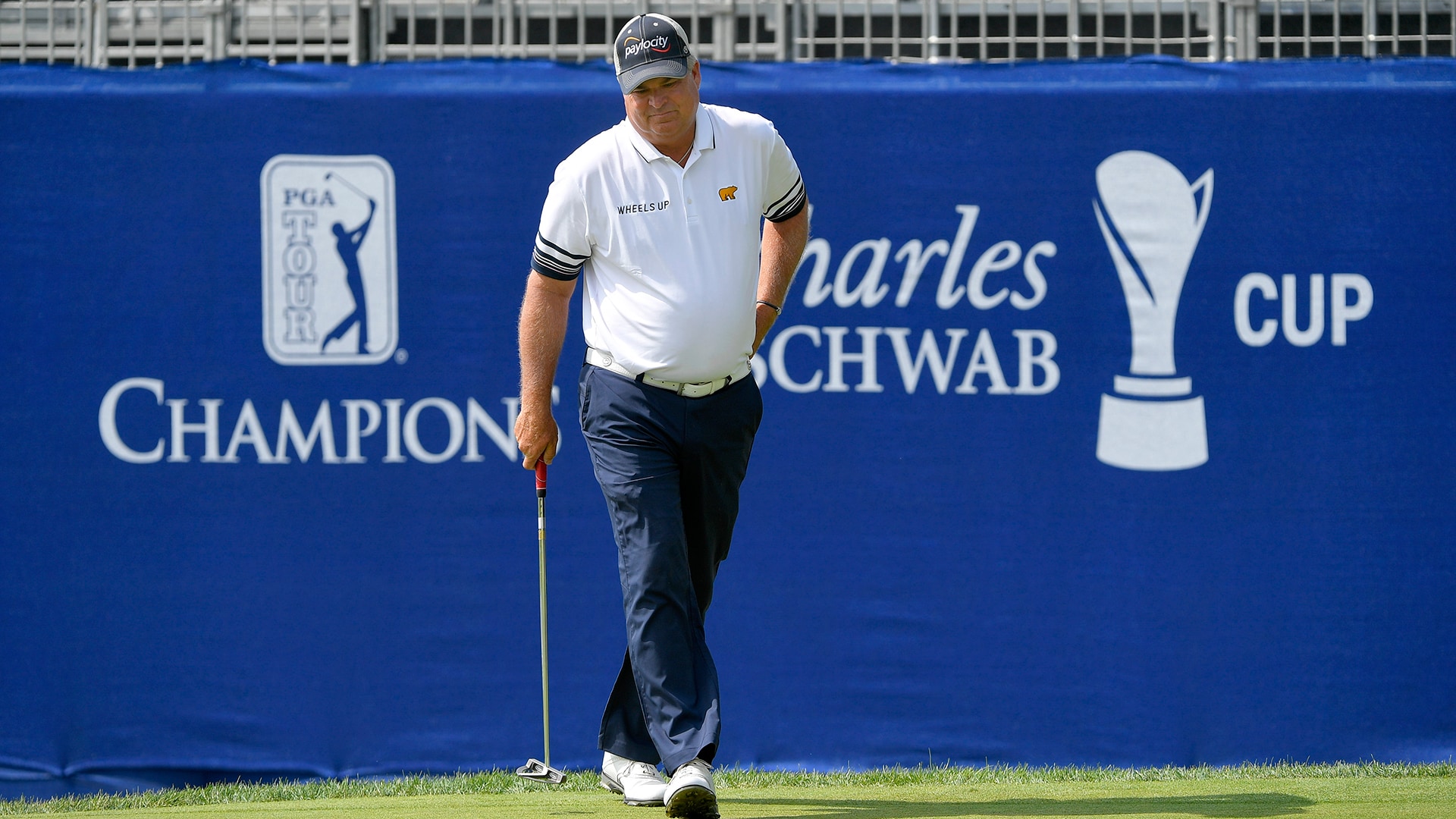 HIGHLAND PARK, Ill. - Kenny Perry wasn't sure what to expect.

He's still rounding back into form following shoulder surgery. His back's bothering him, too.

A spot at the top of the leaderboard in a major? He'll take it.

Perry and Mike Small shot 7-under 65s to share a one-stroke lead in the first round of the Constellation Senior Players Championship on Thursday.

Bart Bryant, Glen Day and 2015 U.S. Senior Open champion Jeff Maggert were one stroke back in the fourth of five majors on the PGA Tour Champions schedule.

Defending champion Scott McCarron was in a pack at 5 under, while three-time Senior Players winner Bernhard Langer and Vijay Singh were another shot back at Exmoor Country Club. David Toms, coming off a win at the U.S. Senior Open, shot 2 over.

The 57-year-old Perry and the 52-year-old Small - the longtime Illinois golf coach - each made eight birdies and one bogey. Perry is in contention for his fifth senior major to go with two U.S. Senior Opens (2013, 2017), a Senior Players Championship (2013) and the Regions Tradition (2014).

Surgery on his right shoulder kept him out from November until late April. He has one top-10 finish in seven starts this season.

Adding to his difficulties, Perry's back flared up on him last week. He bent over to pick up a club while practicing at home in Kentucky. Next thing he knew, he was on the ground and then rushing to see his chiropractor.

All that happened as he was recovering from a bout with strep throat.

''I had played seven straight weeks in a row,'' Perry said. ''It was terrible. ... Seven weeks in a row was way too much golf for an old man, so I just said that was not what I needed to do anymore. Last week was horrible. I couldn't do a lot. And then didn't have a lot of expectations coming in here, but I hit the ball nice and finally made a few putts, and that's why I shot a good score.''

Perry three-putted for bogey on the par-4 seventh and missed a 3-foot birdie putt on the par-4 18th. Otherwise, his round was largely stress-free.

Small never has won on the PGA Tour Champions. He is not a tour member and made the field with strong performances in three events where he received sponsors' exemptions. He tied for 10th at the American Family Insurance Championship in Madison, Wisconsin, in late June after tying for ninth at the Principal Charity Classic in Des Moines, Iowa, two weeks earlier.

What would a victory here mean?

Bryant was 7 under before finishing with a bogey on 18. But he put himself in contention for his second senior victory to go with the 2013 Dick's Sporting Goods Open.

Not bad, in the midst of what he called a ''very mediocre'' season and a difficult few years on and off the golf course. His wife Cathy died of brain cancer in April 2017, and he finished outside the top 10 in all 14 starts last season. He has one top-10 finish in 10 events this year. But a recent putter switch has boosted his confidence.

Bryant ditched his Bobby Grace putter in favor of an Odyssey 2-Ball before the final round of the American Family Insurance Championship last month. He bought it at a Dick's Sporting Goods the night before, and then shot a 66.

Toms struggled on the greens after making long putts on two of the final three holes at the Broadmoor two weeks ago to help secure his first PGA Tour Champions victory.

The 2001 PGA Championship winner was 2 under before missing the green on the par-3 eighth, starting a run of three straight bogeys and four in five holes.

Toms three-putted the par-4 ninth and hit a poor drive on No. 10.

''I still felt like I was playing OK,'' he said. ''But all of a sudden, instead of being three or four under, I was over par. The wind was a little tricky that back nine. I never made any putts, so that was the difference today.''